Libya getting back into tanker business

Hope for resumed activity in the oil tanker business is growing as the rebellion in Libya appears to be near a conclusion. Tanker shipping has been hurt by the lack of cargoes out of Libya for half a year now. Oil majors and oil service companies are right now getting back to Libya to assess the conditions of the facilities. It is hoped that the oil production can restart soon, opening up for renewed fixing of tankers to lift Libyan oil exports. Without Libyan oil exports, there is no hope for improvements in the tanker rates in the Mediterranean.

Hope for resumed activity in the oil tanker business is growing as the rebellion in Libya appears to be near a conclusion. Tanker shipping has been hurt by the lack of cargoes out of Libya for half a year now.

Oil majors and oil service companies are right now getting back to Libya to assess the conditions of the facilities. It is hoped that the oil production can restart soon, opening up for renewed fixing of tankers to lift Libyan oil exports. Without Libyan oil exports, there is no hope for improvements in the tanker rates in the Mediterranean.

Shipping:
As early as the beginning of April, leaders from the Opposition Forces asked the UN for help to restart oil and gas exports from ports under their control. They stated that the issue required “urgent attention” to enable Libya’s economy to keep functioning. The Suezmax crude oil tanker MT Equator, built 2006 was the first to load crude from the eastern port of Marsa El Hariga destined for China. Such a cargo was worth around USD 112 million, providing some assistance to the Libyan economy. Later on more shipments followed, facilitated by the Transitional National Council (TNC) set-up, Libyan Oil Company, founded as early as mid-March.

The tanker market has obviously been severely impacted by the situation in Libya, first and foremost as a consequence of the drop in cargoes to be lifted from there. Secondly, because the longer-haul fixtures that replaced the Libyan oil exports never really materialized in the form of higher tanker freight rates. The spike in freight rates by end-February/beginning of March illustrates the last minute rush for the sweet Libyan crude oil and the uncertainty in the tanker market caused by the outbreak of the Libyan civil war. Same spike in freight rates can be found for all tankers, crude and product. Note that the Egyptian revolution, ending 11 February with the resignation by President Mubarak caused no fluctuation in the Aframax Market. 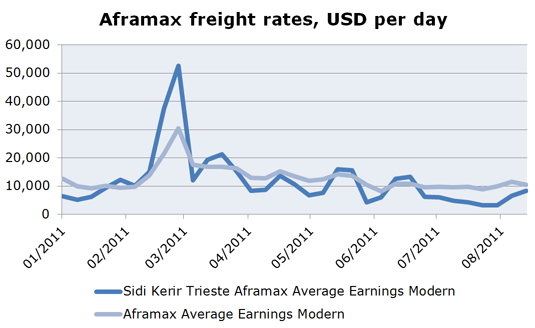 Going forward the tanker market should be positively affected by resumed oil production and subsequent seaborne exports out of Libya as well as a need to restore the Strategic Petroleum Reserves (SPR) that was drawn upon due to the IEA intervention. The market intervention dug 60 million barrels out of the IEA nations SPR, equal to a cargo volume likely to deploy 30 fully laden VLCC’s.

In 2009, Libya exported 1.33 million barrels of oil. Assuming that this is the export target we are aiming at in 2012 and that most of it is crude oil which is shipped off in Aframax crude tankers and the rest of it are various oil products, monthly demand for 60 Aframax vessels and 30 MR product tankers are what’s in sight.

What happened:
On 18 February 2011, active resistance to Government began in Benghazi after three days of protests. From this point in time, what started as peaceful protests gradually developed into a full scale rebellion and civil war. On 17 March, UN Security Council resolution 1973 was adopted and formed the legal basis for international military intervention in the Libyan civil war. On 23 March, NATO began enforcing a naval blockade of Libya while working with the IMO to ensure that legitimate private and commercial shipping to Libya continued.

Before the war, Libya produced 1.57 million barrels of crude oil per day (mb/day). Following the outbreak of violence, output dropped by 80% to around 0.25-0.3 mb/day since March, most of which was said to be consumed domestically – leaving little room for export. This left the global oil supply short of 1 mb/day. Given the quality of the Libyan crude, the shortfall in exports widened the premium of light sweet grades. This development is clearly illustrated by the opening of the large spread between the WTI and the Brent oil. In July 2011 the monthly production was just 53,000 barrels per day.

Short fall in global oil supply:
The short fall in oil supply to the world market has to less-than-full extent been covered by Saudi Arabia and Nigeria primarily and recently also by Angola. But the less-than-full oil supply prompted the International Energy Agency (IEA) to take action in an attempt to balance the market. IEA intervention during June/July was all about making sure the oil supply was sufficient to prevent a potential shortage and following price hike going into the autumn and winter seasons.

The shortfall in oil supply was somewhat covered by several oil producing nations and not by Saudi Arabia alone which supposedly was the only one with spare capacity. However, the tanker market was left without the anticipated effect from the longer-haul demand increase that could have benefited the market. This supply disruption significantly lowered tanker demand in the Mediterranean; in particular Aframax demand from Libyan ports was hurt, but also oil products export was halted. Primary costumers of Libyan oil are Italy, Germany, France and Spain.

Path back to normality:
What kind of road blocks are we looking at: will it be damaged oil export terminals, pipelines or production facilities? Libyan crude oil is quite waxy, so if a pipeline has been left inactive for a long time it may have clogged up. This leaves two to three months of maintenance before the clogged up pipelines can be used normally. But to what extent the grid of pipelines needs to be worked on before full productions can resume remains one of the key chokepoints in the recovery.

A Reuters survey amongst analysts showed that 40% think oil production will be back at pre-war levels in 6-12 months. This timeframe obviously depends on how quickly Libya will be able to sign new deals with the international oil companies, amongst them possibly new entrants from Russia and China, and how strong the incentives given by TNC to the oil majors will be. In relation to existing oil contracts, Libya has said that legitimate contracts will be honoured. But it goes without saying that Libya will need cash and that means getting oil production on stream fast.

According to Wood Mackenzie’s Upstream Service graph, the full recovery could take longer than 6-12 months as they suggest a timeline up to two years, with the large Sirte basin taking the longest time as this is the area presumably most affected by war damages. 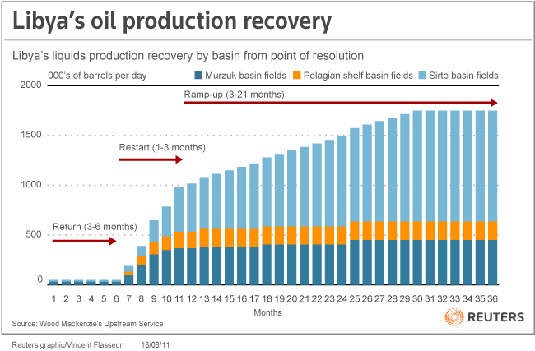 According to the oil services company OPS International, limited Libyan oil production could resume rather quickly as most oilfields seem to have avoided severe damage. The company recently sent people into the large Sirte Basin south of Benghazi for inspection of the installations and facilities. Output from the Sirte Basin is shipping out via the largest terminals in Marsa El Brega, Ras Lanuf and As Sidrah, areas which have been the centre of many battles between Gaddafi-loyalist forces and Opposition Forces. 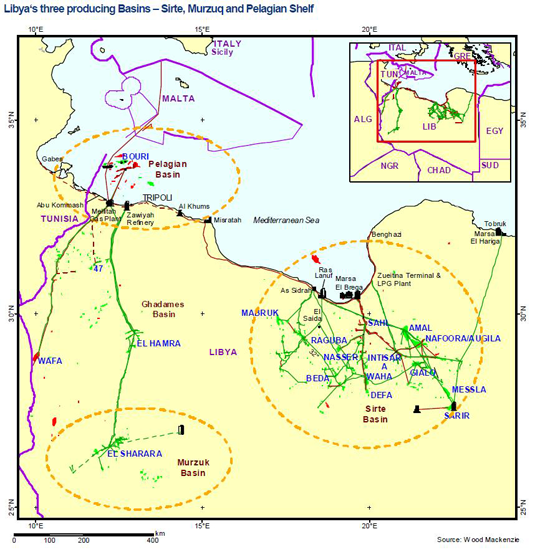 Contact online
BACK TO: Container Shipping - As consumer demand remains weak, a potentially very poor peak season is about to dawn on this haunted sector NEXT: Record recycling activity stirs optimism in dry bulk