While growth in most emerging and developing economies continues to be strong, slowdowns caused by the devastating earthquake and tsunami in Japan, weaker than expected activity in the US and shocks to oil supply weighed on the global expansion in the second quarter of the year, the IMF said recently.
Listen to podcast of this article

Global economy:
While growth in most emerging and developing economies continues to be strong, slowdowns caused by the devastating earthquake and tsunami in Japan, weaker than expected activity in the US and shocks to oil supply weighed on the global expansion in the second quarter of the year, the IMF said recently.

The most influential negative surprise was the upsetting effects of the earthquake and tsunami on the Japanese economy, with supply chain disruptions weighing heavily on industrial production, and consumer sentiment and spending in the world’s 3rd largest economy and beyond. Meanwhile, GDP growth in the Eurozone, driven by Germany and France, has been better than the IMF expected, but concerns about the depth of fiscal challenges in some European countries and the US have triggered renewed heavy financial volatility.

This ongoing financial turmoil has created a delicate moment for the global economy, and the crisis is not over until advanced economies are creating enough jobs again, according to the OECD. The organisation also points out that there is some concern that if downside risks reinforce each other, their cumulative impact could weaken the recovery significantly, possibly triggering stagflation in some advanced economies. Despite the negative surprises, global growth attained an annualized rate of 4.3% in Q1 2011. But the mild slowdown that has been observed in Q2 already is not very comforting.

What should calm this turbulence and bridge the gap to a more steady global economy? Public stimuli from governments across the globe, which should have held up economic growth until private consumption had run out. This has happened prior to a re-emergence of a self-sustained economic environment where consumers once again strongly push demand and growth forward. The markets cry out for decisive action, but politicians hesitate and refrain from dealing with this challenge as they are about to run out of tools and fear a new era of inflation. However, doing nothing only makes things worse. Who are we to rely on?

By mid-June, IMF adjusted 2011 World GDP growth downwards and inflation upwards in the direction of stagflation. Having said that, there are still some unlikely ways to go before the recovery turns that sour. 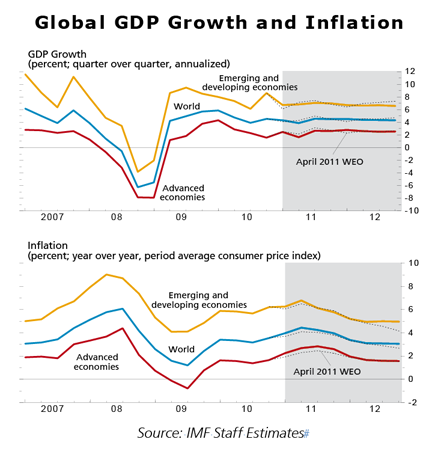 Commodity prices, mainly food and oil, have been on the rise most of the year generating inflationary pressure in mainly emerging and developing economies. Meanwhile, the problem in some advanced economies is the opposite – that is deflation and fears of a deflationary spiral where lower prices lead to lower production, which in turn leads to lower wages and lower demand – which in turn leads to even lower prices.

US:
Poor second quarter GDP growth in the US unfortunately proved that the so-called “soft patch” is not disappearing easily as its expected temporary status is getting closer to permanent. The growth number came in at 1.3% as compared to Q1 growth of 0.4%. US manufacturing ISM disclosed this development with the steep drop in May and soft comeback in June. ISM for July came in at 50.9 signalling that Q3 could be tough too.

On the (temporarily) positive side – the US debt-limit has been elevated by a last-minute compromise. A US default would have put more obstacles in the way for US and global recovery than we are already challenged by today. The uncertainty surrounding the US debt ceiling negotiations meant, amongst other things, that the Dollar dropped significantly against the Euro and gold went to a new all-time-high.

Being a political much more than an economic crisis, the problems created by this domestic political battle have been far-reaching, and developed an unnecessary uncertainty about the US’ ability to pay its dues as well as its future direction for economic development.

Asia:
China's official manufacturing PMI fell in July for four months in a row to a 29-month low of 50.7, down 0.2 from June. Also the HSBC/Markit manufacturing PMI, focusing more on smaller private companies, dropped in July. Actually it dropped below the 50 point threshold, signalling that the economy is no longer expanding. Sustained domestic fiscal tightening and weak foreign demand are the reasons behind this new low-point. A closer reading of the underlying components such as new orders in the official PMI suggests that a “soft landing” is more likely than a “hard landing”. This may, in turn, translate into a bottoming out at current level of the manufacturing PMI and thus also the underlying industrial production. GDP growth to remain strong at current manufacturing levels, with second quarter GDP growth at 9.5%

As inflation is still high on the agenda in China, the central bank is unlikely to change its course due to developments in 2011. Monetary policy has been contractive to handle growth and inflation and another round of austerity measures cannot be ruled out for the second half of the year, despite the recent slowdown on key export markets as well as domestically. 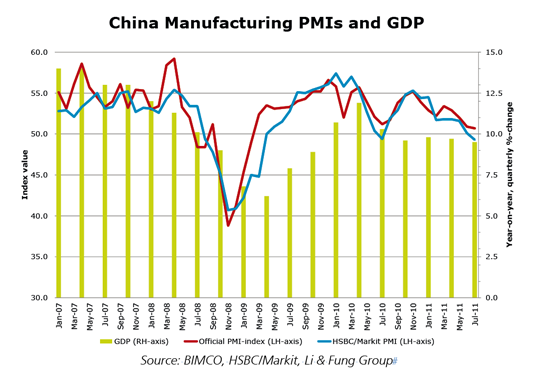 EU:
Despite the upward adjustment of GDP growth for 2011 by the IMF, Europe is continuously haunted by the unsustainable economic situation in Greece, Spain, Portugal, Ireland and Italy. Following the passing of essential get-back-on-track bills by the Greek Parliament, the financial markets started to breathe almost normally for a while as focus shipped toward the other side of the pond by the debt-ceiling issue in the US. But shortly after that was settled, the financial markets reacted strongly again to the overall uncertain financial situation on both sides of the Atlantic.

Outlook:
Looking ahead in China, domestic demand is set to continue to be boosted by the local governments’ strong efforts to build public housing and China’s export growth should be supported by rising demand from the emerging economies. Rising demand from advanced economies is likely to remain subdued in coming months.

Japan is clawing its way back towards normality but the road remains bumpy and challenging. Both in terms of normal living and in terms of economic recovery the challenges are clear and present. This is hurtful in Japan and beyond.

As a US default on payments is no longer a short term threat to the US, the US Dollar could gain some strength against the Euro. In the medium term, the threat to the US economy – and subsequently the global economy – is whether the planned budget savings are severe enough to avoid another credit downgrading and the subsequent political uncertainty. Moreover, employment growth and GDP growth is set stay too weak to create a powerful and sustainable economy in the coming months.

Following the 2 million barrels per day for one month release from IEA oil reserves, oil prices have moved sideways. The move was made to rebalance supply with demand in respond to the disruptions in the availability of oil due to the shortfall of Libyan output and to put a damper on oil price inflation as it drags down pace of the much needed global recovery. The move to release IEA oil stocks has only happened twice before. 1) In the build up to the Gulf War in 1991 and 2) after Hurricanes Katrina and Rita damaged offshore oil rigs, pipelines, and refineries in the Gulf of Mexico in 2005.

The absence of major OPEC increases of oil supply to the market prompted the move by IEA, due to a real possibility that commercial stocks could fall to the bottom of their seasonal range, risking a renewed damaging and sustained surge in oil prices in Q3 and Q4.