Overall dry bulk demand is developing in a disappointing way. By the beginning of the year, overall demand was forecast by
Listen to podcast of this article

Demand:
Overall dry bulk demand is developing in a disappointing way. By the beginning of the year, overall demand was forecast by Clarksons to hit 7% y-o-y with coking coal being the prime mover. Now, 6% is expected and the trend could go further down as unexpected disruptions tend to surprise on the downside.

In January demand growth of 13% for coking coal was expected, now only 1% growth is likely. Firstly, the extensive Australian flood affected the supply side and then the Japanese tsunami affected the demand side in a combination with evaporating Indian imports. Indian imports of both steam and coking coal were expected to be sky high as they were in 2010, but that forecast has failed completely. The forecast for coking coal is down 18.1% from the start of the year, and the total of 5 major bulks (iron ore, coal, grains, bauxite/alumina and phosphate rocks) is down 2.3% as compared to the initial demand forecast at the start of the year. 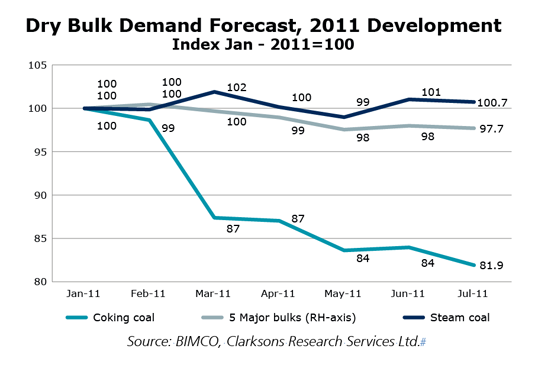 In comparison with what was expected initially from 2011 demand, Clarksons now forecast demand for seaborne coking coal 18% lower. Moreover, overall seaborne demand growth has slid from 7.2% to 6.1% with the 5 major bulks responsible for the lion’s share of that. In absolute numbers, demand for the 5 major bulks is estimated at 2,345 million tonnes for 2010 with the forecast for 2011 now at 2,427 million tonnes. While this is equal to a growth of 82 million tonnes it represents a significant downward adjustment from the initial forecast of 146 million tonnes made eight months ago at the beginning of the year. In terms of Panamax vessels (carrying 65,000 tonnes cargo 7 times a year) the current forecast estimate equals a demand growth for 191 vessels, which represent 130 vessels less than expected at the start of the year.

Despite economic slowdown in China, the world largest consumer of iron ore, China’s import of iron ore reached a solid 334.25 million tonnes during the first half of 2011, up by 25.6 million tonnes equal to 8.3% y-o-y.

In terms of freight rates, development has been closely in line with the BIMCO forecast in the previous report from June. Regardless of vessel size, transports were sold on a time charter average rate ranging from USD 9,300 per day for a Capesize up USD 15,700 per day for a Panamax. All segments have experienced slowly sliding freight rates with little volatility over the past two months. The market pulse is slowing and the highs and lows are narrowing. 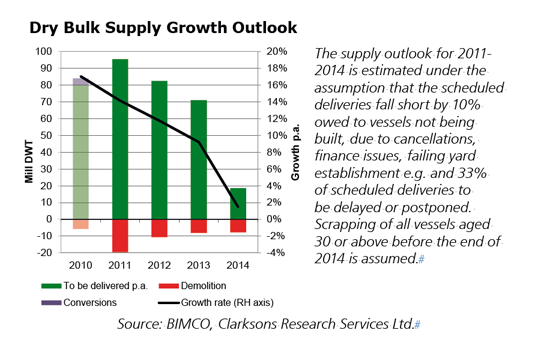 Supply:
The active fleet has grown by 7.4% so far in 2011, caused by delivery of 52.5 million DWT, offset by as much as 14.8 million DWT being demolished. As the new building delivery pace stays strong with demolition trying to keep up the fleet is estimated to grow a tad slower at 12.9%.

The inflow of new orders during first half of 2011 is down 67% as compared to same period last year. This has influenced the orderbook to fleet ratio positively alongside the massive deliveries. It currently stands at 42% – down from 79% – but still a very high overall figure with 241 million DWT in the pipeline. 79% was recorded in October 2008.

There is still extensive slippage in the orderbook going forward. BIMCO estimates that one out of every three vessels is postponed for a variety of reasons.

The demolition pace continues to stay strong – never before has so much tonnage been demolished. The average size of a vessel going for demolition is 72,647 DWT, meaning that the big ships are now leaving the fleet. In 2009, 272 vessels were demolished, but back then owners were scrapping smaller ships with an average size of just 38,640 DWT. In 2011, 49% of the demolishing vessels are the large Panamax and Capesize bulk carriers as compared to 15% in 2009.

The freight market in 2010 surprised many by being a relatively strong year where T/C rates for both Panamax and Capesize vessels were relatively satisfactory. But towards the end of 2010 and so far in 2011 the pressure has been immense on T/C rates – in particular when it comes to the larger vessel sizes. It appears as if the distinction between vessels has been neutralized when it comes to freight rates. In the current markets, vessels can be chartered at almost the same price regardless of cargo capacity and size.

The relationship between demolition and time charter rates has been very strong during 2010-2011. While it was less strong for the large vessel types back in 2009, with owners failing to demolish vessels to a large extend. 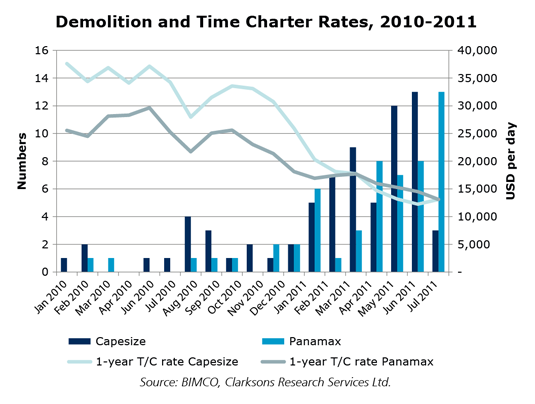 Outlook:
BIMCO predicts that another 450 newbuild dry bulk vessels with an average size of 84,000 DWT will enter the fleet during the remaining part of the year. While some 76 vessels with an average size of 72,500 DWT will be demolished. On the basis of that supply outlook in a combination with a slower than previously expected demand outlook, BIMCO expects that the market balance will continue to be strongly in favour of charterers, with low freight rates across the board. As the global economy is still walking in the shadows of the financial crisis, demand growth remains on a short leash. Together with the massive inflow of new tonnage, the freight market will spoil charterers for choice for at least another couple of years. BIMCO will focus specially on the opportunities provided by the demolition market in a soon to be released analysis.

You have to be able to endure lots of pain if you are amongst those who are about taking delivery of a newbuild Capesize vessel. Regardless of whether you paid USD 105 million for her back in July 2008 or USD 55 million last January, you have the option of chartering her out for half a year at USD 12,500 per day for 5 years at USD 16,000 per day or to try your luck on the spot market. Either way, you’re facing a poor return on your investment in the coming years unless cargo volumes increase dramatically. 213 Capes entered the fleet in 2010, another 250 is going to be added this year.

By early August, the spot iron ore price rose to USD 179 per tons on the back of strong steel production in China which was up by 10% in first half of 2011 as compared to the first half of 2010. Even though this indicates that production may slow down a bit, it also indicates strong demand for the commodity.

Major mining companies have lowered their forecast on coal and iron ore production over the medium term, resulting in expectations of lower seaborne volumes than previously expected. Future projects have been postponed and existing projects delayed. Should demand for these commodities pick up sooner than expected only prices will react to this development in the short term, as experienced recently. Transportation providers will stay unaffected until volumes actually pick up.

Contact online
BACK TO: Container Shipping - Slow demand and the absence of resumed idling of vessels has proved to be a heavy burden in the battle for rate restoration NEXT: Macro Economics - The US is jeopardising the global recovery as job creation remains top challenge across the board