The healthy demand picture of some 6% demand growth is what keeps the dry bulkers afloat. Despite the multiple disruptions that have already taken place, we see growing demand for almost all commodities. This has certainly prevented a meltdown of freight rates. Many people expected the current doldrums already last year, but extremely strong demand growth in 2010 postponed the hardship into 2011.

Listen to podcast of this article

Demand:
The healthy demand picture of some 6% demand growth is what keeps the dry bulkers afloat. Despite the multiple disruptions that have already taken place, we see growing demand for almost all commodities. This has certainly prevented a meltdown of freight rates. Many people expected the current doldrums already last year, but extremely strong demand growth in 2010 postponed the hardship into 2011.

While Capesize vessels are having the worst time of their lives, Supramaxes have kept up quite well recently – particularly in the Atlantic, where rates have moved more sideways than down. But the overall direction is in tune with all the other dry bulk vessel sizes – and that’s “southbound”. Even the smallest vessel type, Handysize, has not completely withstood the overall downward pressure, as rates in that segment are down 45% in May y-o-y. But if you look closer at 2011 alone, Handysize rates have been very stable in the USD 10,000-12,000 per day interval. 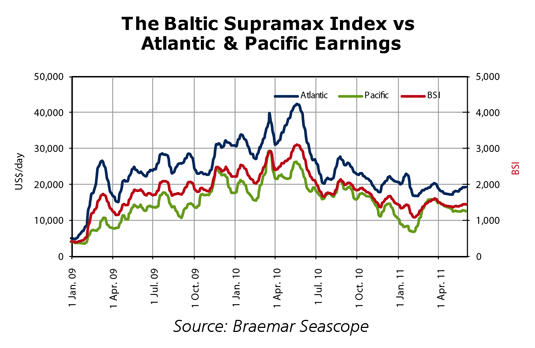 Like the tanker business has already done for some time now, the dry bulk business is settling in for an endurance race, as profitability hits new lows.

As Australian coking coal exports have been limited due to the extensive floods, the shortage has been spilling over into rising regional coal prices. That has benefitted the US, South African and Columbian exports, which in combination with falling freight costs, has made long distance coal transports competitive.

Extraordinary post-quake demand from Japan remains to be seen and the lack of dry bulk commodity demand from Japan is expected to stay around for another few months. As an exception the steel industry has managed to prevent a massive drop in output and thus also kept raw material imports steady. Official Japanese estimates point at a less than 3% drop in steel production in Q2 as compared to the same period last year. Thus Japanese iron ore and coking coal demand have not been great movers in the market and are not really expected to become so throughout the remainder of 2011. What happens in the medium term depends largely on when rebuilding of the nation kicks off big time. Overall Japanese industrial production fell by 14.0% y-o-y in March; this is a significant drop bearing in mind that 1/3 of the month was normal.

Regardless of the slightly softer overall demand picture that is playing out when comparing it to the forecast at the start of the year, demand for most commodities is solid. Iron ore is set to be the best performer of the major bulk commodities at 1,040 million tons (+6% y-o-y) and amongst the minor bulks, cement stands out positively as it claws its way back from the 2009-abyss. The level is still some 15 million tons shy of the 2006-peak, but the cement trade is on course for 91 million tons, which will then be the highest demand on record when you exclude the extraordinary years 2005-2008. 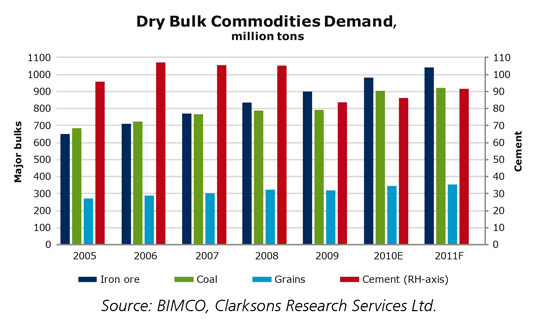 Supply:
The active fleet has grown by 5.2% so far in 2011, caused by delivery of 36 million DWT, offset by as much as 9.6 million DWT being demolished. The high demolition pace experienced during Q1 has stayed strong – positively impacted by firm and high demolition prices. We have thus revised upwards our demolition estimate significantly. As 10 million DWT has already been demolished, a new but unexpected record level of demolition is set to take place in 2011. As the new building delivery forecast is only marginally higher than previously estimated, the higher rate of demolition means that the fleet is estimated to grow a tad slower at 12.9%.

It is equally important that owners have just ordered 10.5 million DWT of new tonnage in the first five months. For sure the depressed freight markets are highly supportive to this trend. Should this pace of contracting activity be representative for the full year, 2011 will become the slowest year for new building contracts in nine years.

This means more trouble to the yard industry, as it struggles with a potentially very large overcapacity in coming years as yards fail to attract enough orders to run at full utilization, despite tempting owners with a slow but still ongoing slide in newbuilding prices. 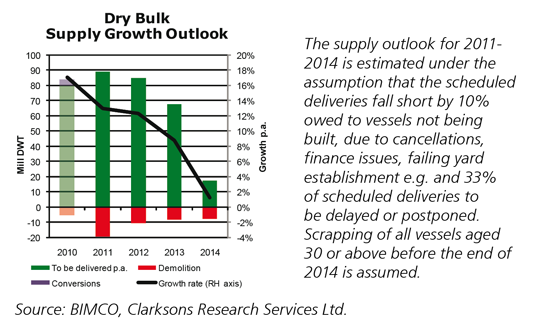 Outlook:
Russia is about to lift its ban on wheat exports on 1 July – a ban which has been effective since drought and wildfires affected the Russian wheat harvest in August last year. At that time, Russia was the world’s second-largest wheat exporter, with cargoes mainly going out of the Black Sea. The lifting holds the potential of supporting dry bulk freight rates in that region should a large amount of wheat get seaborne to be discharged in EU and US, where bad weather conditions have already affected the forecast for this year’s harvest negatively.

Vale has now started to operate the first of its 400,000 DWT Very Large Ore Carriers as the Vale Brasil has now been delivered (10/5-2011) from Daewoo. Her maiden voyage goes from Ponta De Madeira in Brazil to the port of Dalian in China. According to the orderbook, Vale has another 7 owned VLOCs due for delivery in 2011. A total of 35 owned and chartered 400,000 DWT VLOCs will be delivered to Vale before the end of 2013. The giant bulkers will first and foremost provide fixed transportation costs (excl. bunkers) for Vale, but the impact on Capesize freight rates from the inflow of VLOCs on the important Capesize iron ore route from Brazil to Asia is likely to be of significance to the duration of the low freight rate environment in the Capesize market, which is already massively oversupplied.

The worst drought in 50 years has been haunting China – impacting e.g. the hydro-electricity power plants and raising the prospect of a lack of electricity in certain regions. Recently, heavy rainfalls have changed the situation somewhat, but the extent of the counterbalancing impact is currently unknown. Coal is a natural substitute to make up for the lack of power. China receives 19% of its energy from hydropower plants. China, the world’s largest producer and consumer of coal, imports when the price difference and quality are right. Imports of coal are, however, vital to China as its own giant reserve (the world’s third largest) is set to last just 38 years at the current production level. Currently, import prices are relatively high and thus low volumes of coal go into China. The drought situation may spur higher overall demand and thus push domestic prices higher and by that potentially restart seaborne coal imports, which should support the freight markets.

Whether or not the delayed lifting of the Indian iron ore export ban from Karnataka will bring about better freight markets for Supramax and Panamax remains to be seen, especially as it has to counterbalance the monsoon season, which normally dampens Indian dry bulk activity.

Contact online
BACK TO: Macro Economics - Global recovery is taking a breather before growth is expected to resume at a higher pace in the second half of 2011 NEXT: Tanker Shipping - Few escape routes for the already stressed out tankers – Summer is unlikely to heat freight rates