The speed of the global recovery has slowed down over the past couple of months, but the prospects for stronger growth in the second half of the year remain intact, as the underlying growth trend as well as job creation continues. But sustaining this may be highly dependent on output and demand solidifying in the coming months.


Listen to podcast of this article

Global economy:
The speed of the global recovery has slowed down over the past couple of months, but the prospects for stronger growth in the second half of the year remain intact, as the underlying growth trend as well as job creation continues. But sustaining this may be highly dependent on output and demand solidifying in the coming months.

At present, three central factors appear to be responsible for the loss of momentum in the global economy: 1) The rising oil prices from USD 80 to 125 per barrel over the past 7 months; 2) The earthquake in Japan which proved to have global repercussions; and 3) The tightening of the Chinese economy to prevent overheating and inflation. The rising oil price in particular could be the most important factor as it has limited the purchasing power of the consumer, limiting the funds available for buying other goods. This in turn has resulted in the slowing down of production, as sales have been stalling and production to stock is seen as an unwanted option for the manufacturing industry.

Manufacturing indices from China, Japan, US and the Eurozone are all showing the same pattern of slowing growth. Despite this slowdown, only the most hardened pessimists believe that a double dip is likely to be developed, even though this possibility gets a lot of attention in the US. The main fundamentals behind a higher demand and thus also output going forward, is a lower oil price, a recovering Japan that resumes manufacturing whenever possible and austerity measures in China that are about to ease over the coming quarters. 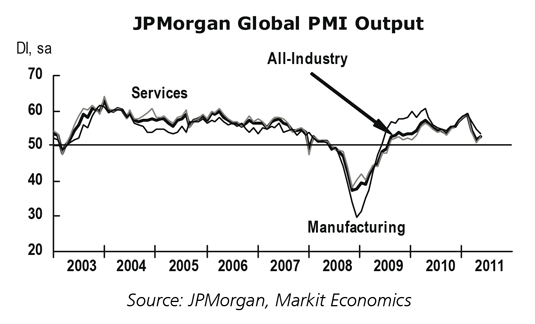 US:
The state of health of the US economy from the perspective of the consumer, as measured by the Conference Board Consumer Confidence, fell in May by 5.2 points to 60.8, which is the lowest point in 2011. Following a positive start to the year, with increasing confidence in the first two months, a declining trend has taken over.

Overall GDP figures indicate that US growth is slowing. This gives reason for the FED to continue its low interest policy. US interest rates still remain at 0.25%, unchanged since December 2008.

US Manufacturing PMI fell from 60.4 in April to just 53.5 in May – a much deeper drop than expected by the consensus estimate. Despite the sudden drop, for 22 straight months this composite indicator for economic activity in the manufacturing sector has now been in expansionary territory above 50. However, in combination with some disappointing numbers on job creation, a steady stream of worrying indicators caused shaky financial markets at the beginning of June. Troublesome as this may seem, most observers see this as a temporary – and not permanent – softening of the US economy. 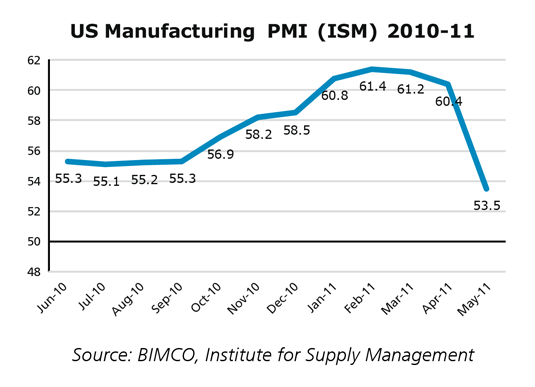 Asia:
China Manufacturing PMI also continued its sliding trend, as both the official data and the HSBC/Markit data hit a nine-month low in May. Getting closer to the 50-level of zero growth, the indices checked in at 52 and 51.6 respectively. Contrary to the US key figures, the Chinese PMI surprised on the upside.

High inflation is adding headwind to growth, as it limits the purchasing power of households. Combined with the overall austerity measures taken to prevent the economy from overheating, more Chinese interest rate hikes are expected later this year. The interest rate currently stands at 6.31%. No hard landing is likely, as the economy is still expanding and nowhere near meltdown.

Throughout the present Five-Year Plan running from 2011 to 2015, China has planned to spend 6.2 trillion Yuan (equivalent to 954 billion USD) to upgrade its transportation infrastructure. This can be compared with the 4.7 trillion Yuan spent during the previous five years. Investment in roads is primary, but waterway transportation facilities are also planned for. As a result of this investment, a “five horizontal and five vertical” comprehensive transportation system should be ready by the end of 2015. Regarding waterways, the deep water berths of ports are set to increase by 25% to reach 2,214.

Following the natural disasters that hit Japan in March, the economy has been under considerable pressure. GDP shrank at an annual rate of 3.7% in the first quarter and analysts expect the second quarter GDP to shrink by another 2.5%, extending the contraction of the Japanese economy that began in the fourth quarter of 2010.


EU:
The debt crisis in Europe continues and Portugal has now also been financially assisted by a joint EU/IMF rescue mission. Moreover, the unsustainable economic situation in Greece is causing headaches in the financial markets as extensive privatizations and intensive debt restructuring talks are two very hot political topics, with much at stake for all the involved parties.

Effective from 13 April the European Central Bank hiked interest rates by 25 basis points to 1.25%, after maintaining them unchanged at a historical low level (1%) for almost two years.

Outlook:
As the price of crude oil remains between USD 100 per barrel and USD 125 per barrel, it remains a drag on the global economic growth but not a threat to a sustainable recovery. The ongoing political unrest in North Africa and the Middle East is also a concern for the global economy as well as to the shipping industry. Seen from a tanker shipping and oil industry perspective, it is particularly vital that the situation in Libya is resolved.

Japan remains challenged in the aftermath of the natural disasters that hit the nation in March. The economy was knocked back into recession by the disaster, as supply chain disruptions and power shortages hit output and exports. The task of dealing with the events that followed the earthquake, amongst them the Fukushima nuclear disaster, is huge and time-consuming. It has naturally put a hold on the anticipated boost in seaborne imports that is now expected to ignite during the second half of the year.

The situation in the US is going to be of key importance in the coming month, seen in the light of the uncertainties related to it. The congressionally approved US debt limit has been reached and political negotiations are on-going to raise it before 2 August. Should this fail, the US Government will default on its payments, adding more uncertainty about the fiscal challenges than the US is already facing. Another important indicator to watch out for is US Housing Starts, which disappointed to a large extent in April as they dropped by more than 9% compared to March to hit an annual rate of 541,000. Fortunately, May data revealed a quick bounce back to 560,000, providing a straw to cling to. This compares to the last 29 months’ average of 569,000. Increasing New Housing Starts is seen as an early sign of a sustainable recovery. Equally important is New Building Permits, which were up by 8.7% in May as compared to April. Quite a positive development, as it puts the development back on top of 29 months average of 589,000 for the first time since December 2010. But in a historical perspective, both indicators are way below the highs of 2007 and before.

Contact online
BACK TO: Perspectives on future dry bulk trends NEXT: Dry Bulk Shipping - An unpleasant endurance race has begun for dry bulk owners, as healthy demand is overwhelmingly outstripped by oversupply