The disasters in Japan and Australia have had their effects on shipping demand in the Pacific Basin. Australia is getting back to normal operational activity
Listen to podcast of article

Demand:
The disasters in Japan and Australia have had their effects on shipping demand in the Pacific Basin. Australia is getting back to normal operational activity concurrent with the hinterland transportation networks getting back on its feet, but working in the other direction has been the drop in demand from major dry bulk importer, Japan. While a significant amount of cargo going into the freight market was “lost” in Australia with a correspondingly hard pressure on freight rates, the situation in Japan has been easier on the market, with only little downward pressure.

All dry bulk segments took a beating in freight rates last year, a detour that came to an end late January, but the Capesize segment was and still is impacted the most by the natural disasters. Since early January, Capesize time charter rates have been below all the other segments including Handysize. While the 3 smaller segments have rebounded since then, Capesize is still down. Current average of 4 time-charter routes is USD 10,371 per day. For comparison – a Handysize makes USD 11,849 per day, a Supramax USD 15,921 per day and a Panamax USD 15,807 per day. 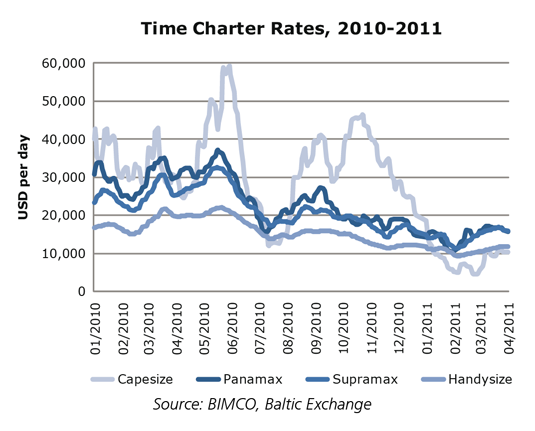 Spot rates on main Capesize iron ore trades from Brazil and Australia, which are the top two suppliers to the Chinese steel industry, look as if they have bottomed out during January and February. This year’s unfolding story in relation to iron ore trades will be the scheduled delivery of the first 6 out of 19 400,000 DWT VLOC’s to the Brazilian miner, Vale. This is expected to impact the market, as Vale is a large charterer of Capesize tonnage to service its Asian customers. In 2010, Vale exported 131 million tons to China. Estimating 6 round voyages a year, the 6 new build VLOC’s will be able to carry 14.4 million tonnes of iron ore p.a., equal to 11% of Vale exports to China. With another 13 to be delivered over the next 2-3 years, Vale will depend much less on the Capesize chartering market – as it will be self-sufficient in 25-30% of its tonnage demand. The vessels are intended to bring down Vale’s price disadvantage to the Australian iron ore by taking out the long-haul maritime transportation cost element. The spot rates are on average 2½ times higher on Brazilian ore, being a close mirror of the difference in distance.

It remains uncertain where Vale is going to establish its Asian iron ore distribution centre. First Qingdao was targeted, but failed to become a done deal. Lately Vale has focused on a Malaysian distribution hub, but another site remains an option, the Tianjin Dongjiang Free Trade Port Zone near Beijing – a new giant port and logistics centre. The final location will be vital to the success of VLOC’s.

Seaborne Iron ore demand is expected to grow by 7% overall, where China will take the most and European demand will increase to a pre-crisis level.

Also recently, the commodities trader Cargill has decided to become a ship owner once again, this time round mainly with the purpose of being an asset player. This adds to the number of large charterers making an entry into ship owning primarily with the object of controlling a larger part of the supply chain and converting variable costs to fixed costs. 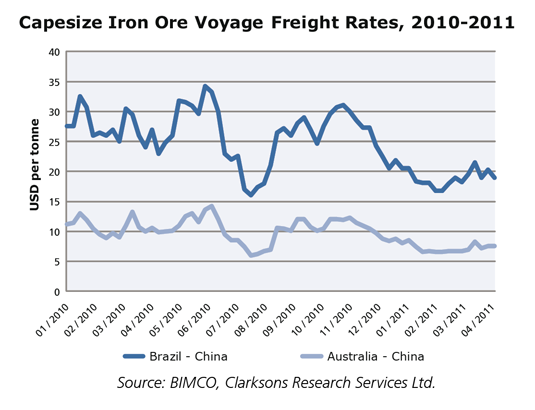 The demand for taking Capesize vessels on time charter is on a par with last year. Time charter rates are currently higher than spot freight rates, which indicates an extraordinarily weak spot market. Representative deals that support the rather flat medium term expectation in the market are, amongst others, Cargill taking the “Semirio”, 174,000 DWT for two years at USD 17,000 per day and Rio Tinto taking “Bulk India”, 177,000 DWT for one year at USD 16,500 per day.

Supply:
Capesize vessels are delivered at a pace of one new vessel every second day. On top of that, 6 VLOC’s have been launched with another 35 potentially up for delivery in 2011 (adjusted for slippage).

The active fleet has grown by 2.7% so far in 2011, caused by deliveries of 222 newbuilt vessels with an average cargo capacity of 85,000 DWT offset by 67 vessels with a total capacity of 4.8 million DWT being demolished. Like in the tanker segments, demolition finally, but still surprisingly, has kicked off strongly – positively impacted by the high scrap steel prices. A 25 year-old large Capesize demolition was worth almost USD 11 million. However, the level of demolishing is still considerably below a level that could balance supply and demand and impact the freight markets positively.

Newbuilding contracts are being signed at the slowest pace since Q2 in 2009. This is a very positive development, especially seen in the light of the unbelievable high contracting level in 2010 with 78 million DWT of new contracts. 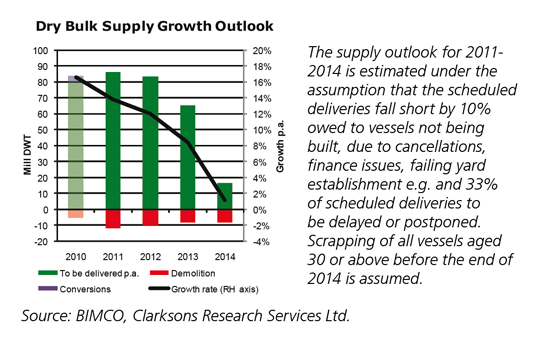 Outlook:
The events in Japan will, in the short term, be a negative story for the dry bulk market as expected high volumes into Japan will be some 10-20 million tons lower, as coal power plants and steel mills have be shut down for a while and some are expected to be so for up to 1 year. In the medium to long term, dry bulk is likely to benefit as reconstruction takes off. Iron ore, coking coal, thermal coal and wood for construction are likely to be in higher demand following the disasters. Unlike Australia, which was a supply story, Japan is mainly about demand falling short – the impact on the freight market has been insignificant as compared to the flooding in Queensland.

BIMCO assesses that Capesize freight rates will remain in depressed territory in the coming months. Capesize Time Charter Average is likely to hover around USD 10,000–15,000 per day and backhaul trip charter earnings likely to continue to make negative returns.

The Capesize fleet has already grown 4.5% this year and overcapacity in the segment will stay a drag on freight rates each time they try to escape the doldrums. Supramax and Panamax are likely to stay firm in the USD 15,000–USD 20,000 per day interval as demand supports this level.

Overall, dry bulk commodity demand growth is expected to be around 7-8% in 2011, with iron ore and coal as usual in the driving seat. This outlook provides a solid demand picture to comfort and fence a collapse of earnings, as oversupply is haunting all segments.

Contact online
BACK TO: Macro Economics - Multiple challenges still await international action from policy makers to support the fragile growth NEXT: Tanker Shipping - Unusually disruptive times combined with a stream of new tonnage in all segments