One year ago the tanker orderbook stood at 132 million DWT – today it totals 118 million DWT. The total orderbook is down by 11% over the last year. Even though new contracts are being signed at a steady pace, that pace remains slower than that of newbuildings being delivered.

One year ago, the tanker orderbook stood at 132 million DWT – today it totals at 118 million DWT. The total orderbook is down by 11% over the last year. Even though new contracts are being signed at a steady pace, that pace remains slower than that of newbuildings being delivered.

But the ongoing ordering activity is happening at a time when the current short and medium-term outlook for both crude and product tankers is rather bleak. The global economy is still not on completely safe ground, as sustainable growth hesitate to stay put and leave the small but still potential risk of a double-dip behind. This risk is best illustrated by the recent political unrest in North Africa and the Middle East, resulting in oil prices rocketing up – putting a damper on growth.

Newbuilding prices are significantly down as compared to the 2008-all-time-high price level. Whether the market can absorb the large amount of new tonnage flowing into the market and keep rates at sustainable levels will depend on the strength and sustainability of the growth in demand. 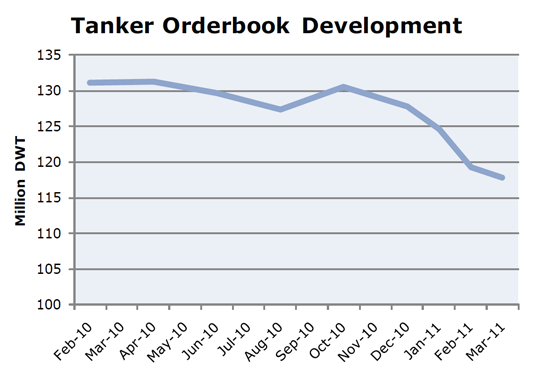 This slower pace of new orders in combination with an overall larger fleet has brought the overall orderbook-to-fleet ratio slightly down. Today the orderbook-to-fleet ratio for crude tankers stands at 29% while the ratio for product tankers stands at 18%. Large delivery years in 2008 and 2009 into the product tanker fleet have impacted the ratio. The same thing is about to happen to the crude tanker segment, due to the large number of expected deliveries in 2011 and 2012.

The relatively higher orderbook in crude tankers stems from the ordering boom that took place in anticipation of a noticeable effect of the phase out of single-hulled vessels. As we know by now, the positive effect from the phase-out never materialized into significantly higher rates. This was partly due to the contraction in demand partly caused by the global economic crisis and partly by the fact that the deliveries of double-hulled tankers far outweighed the scrapping of the untradeable single-hull tankers that they were substituting, making the fundamental market balance heavy on the supply side.

Where are the orders placed?
South Korean shipyards are dominant in the market for more advanced ships. This includes crude oil and oil product tankers, as well as containership, LNG, LPG and other high-tech ship types.

51% of the tanker orders placed in 2010 landed at Korean shipyards, with Chinese shipyards receiving 35%. In 2008 and 2009, the two top shipbuilding nations shared about 70% between them, with South Korea having the upper hand. In 2010 Korean yards took the lion’s share of new orders and expanded this lead. Another noticeable distinction is that South Korea remains by far the technology leader even though China is catching up quickly. An example of this is the average size of the ordered vessels. In 2010 the average size of tankers ordered at South Korean yards was 149,000 DWT equal to that of 2008. Meanwhile the average size of tankers ordered at Chinese yard grew from 73,000 in 2008 to 120,000 in 2010.

In sharp contrast stand the Japanese yards. Just a handful of tanker newbuildings were ordered at Japanese shipyards last year, following the trend from recent years. Japanese yards struggle with lack of competitiveness, as the floating Yen has gained strength against the US dollar and made Japanese newbuilding relatively more expensive in comparison with South Korean and Chinese competitors. 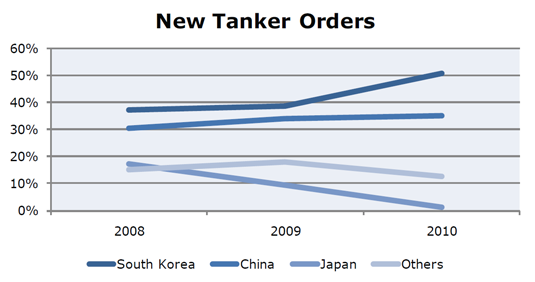 What has been ordered?
In 2010, 50 new VLCC’s were ordered, up from just 19 in 2009 but considerably below 2008. These new orders put more pressure on the already oversupplied VLCC market. Currently, the VLCC fleet consists of 548 vessels with an orderbook of 179 units. Inflow of new vessels in 2009 and 2010 was 55 new vessels each year and a similar amount is expected for 2011 when taking a variety of likely delivery short fall issues into consideration.

The smaller crude segments, Suezmax and Aframax, have also seen rising ordering interest, with the larger Suezmax catching most of the attention. Aframax tankers appear to be out of fashion with only few orders in 2008-2010 and an orderbook-to-fleet ratio of just 15% as compared to 34% in the VLCC and Suezmax segments. This development may also come as a counterbalancing reaction as the tanker workhorses saw a comparable larger inflow of tonnage in 2007-2010. 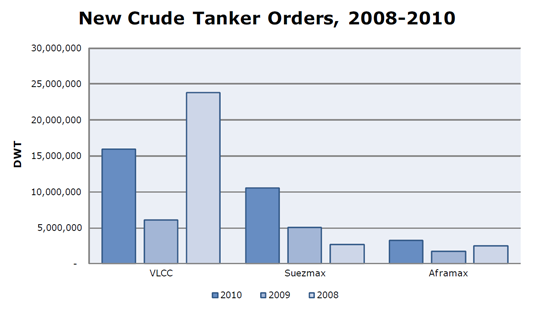 In the product tanker segment the picture is more blurred. LR2 tankers of 80,000-120,000 DWT are back in demand following an almost complete stop of newbuilding orders in 2009. Handysize tankers are defined as vessels with a cargo capacity of 30,000-45,000 DWT. The active Handysize fleet consists of 585 tankers of an average age of 12 years, and with just 33 tankers on order in that segment it appears to be a tonnage size that has grown completely out of ordering taste.

The overall contracting pattern is the same for crude and product tankers, when you look at the development in new contracts made in 2009 and 2010. Both segments have doubled contracting activity. Looking forward at the contracting activity so far in 2011 – it seems as if it could become a rather slow year. 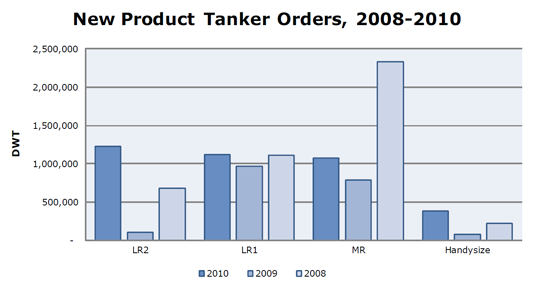 Who placed the orders?
Greek owners have been dominant as the largest investors by far in tankers in 2008–2010, placing around 20% of all new orders for tankers. Other significant owner nationalities active in the newbuilding market include South Korea, Norway, China, Turkey and Japan. In terms of DWT in the total tanker orderbook, Greek owners firmly hold on to the top of the ranks, holding approximately 30% of the order book.

Where are newbuilding prices going?
Newbuilding prices are expected to soften for both crude and product tankers, as yards are eager to sign new deals and owners are hesitating due to market conditions and the size of the active tanker fleet. Crude tanker freight rates have declined throughout the second half of 2010, and the sliding tendency has continued somewhat in 2011. BIMCO expects average crude tanker freight rates in 2011 to be lower than the average rate of 2010. On the other hand, product tankers have felt the pressure for more than two years now and rates are expected to hover around the levels of 2010, with a potential of surprising on the upside if the global economy strengthens.

Where will it go from here?
A flow of newbuilding orders lower than that of 2010 is expected for 2011. Even though the two-track global recovery is still on track, downside risks remain elevated for all. And since the large oil consuming countries are on the slower of the two-recovery tracks, oil demand and consumption will not be strong enough to move freight rates levels significantly. The downbeat sentiment in the trading markets is expected to be mirrored by a lower level of newbuilding contracting.