Container Shipping - Markets are over the hill of the rebound

The last two years have been extreme for the container shipping industry. When the crisis started in 2008, the industry first saw volumes contract sharply and subsequently rates dropped like a stone as liner companies were fiercely fighting for market shares at full speed – so to speak.

Demand:
The last two years have been extreme for the container shipping industry. When the crisis started in 2008, the industry first saw volumes contract sharply and subsequently rates dropped like a stone as liner companies were fiercely fighting for market shares at full speed – so to speak. Battling with low demand throughout 2009 the industry laid-up almost 600 vessels and prompted the industry to introduce slow steaming and extra slow steaming widely to reduce ship supply and reduce cost.  Going into 2010, the industry still had more than 500 vessels laid-up, but the surprisingly quick comeback of strong demand across the board meant large volumes were to be transported – that caused both rates to go up and the laid-up fleet to be brought back into service. A couple of weeks ago a little more than 120 vessels were laid-up – but the new drop in volumes has meant that an increasing number of vessels are being laid-up again. By mid-November, according to Alphaliner, 142 ships of 336,000 TEU were idle. 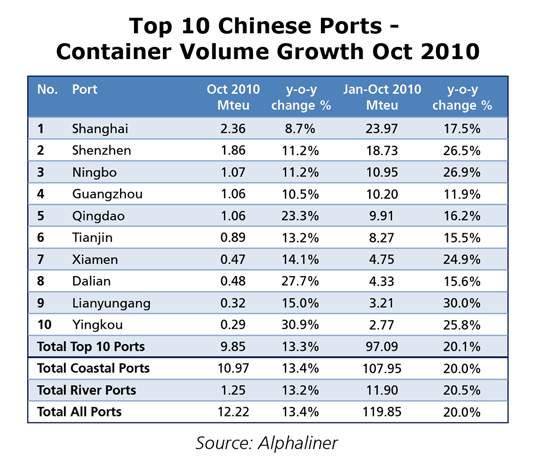 Total container throughput in the top-10 Chinese ports grew by 20.1% y-o-y for the 10 months from January to October. Shanghai held onto its new position of being the world largest container port in close competition with Singapore. The total 10-month container throughput in Shanghai was 23.97 million TEU, up 17.5% as compared to the same period in the previous year.

Despite the high growth rates in port throughput, the end of the Q3 peak season has seen volumes and freight rates sliding on peak trade lanes from Asia to Europe and the US. While the broad composite index CCFI (covering 10 major export ports in China) has fallen only 9% from its August peak, freight rates on the key trade from China to Europe have dropped 15% and rates from China to US-West Coast have dropped 12%. If you take the narrowed index SCFI measuring spot activity out of Shanghai, the drop is more dramatic. Composite Index and Freight rates for containers bound for Europe have dropped by 22% since the August peak, only to be topped by freight rates for containers bound for the US West Coast, which have dropped as much as 25%. 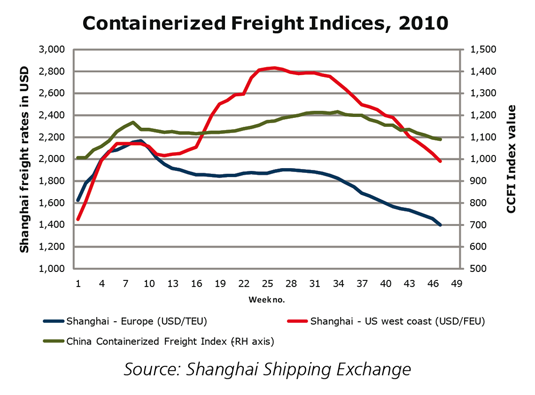 If rates continue downwards in the coming weeks, charterers will naturally look to secure longer periods with options attached. Despite the pressure of having prompt tonnage at this time of year, owners continue to dig their heels in and as the fixtures generally illustrate, they are succeeding in only committing their vessels for shorter periods in order to cover themselves until next Spring in the hope of a revived market.

Supply:
The number of ships and amount of TEU on the orderbook has grown throughout the last two months. This indicates that orders are placed at a faster pace than ships are being delivered.

The active fleet has grown by 9.1% so far in 2010, driven by the 1.3 million TEU that has been delivered year-to-date in the form of 254 new ships. Meanwhile, only 78 vessels, with an average cargo capacity of 1,545 TEU and average age of 28 have been demolished so far in 2010. The potential for demolition in the overall container segment in the coming years remain irrelevant for overall fleet growth, as the containership fleet is so young. Future scrapping is likely to affect the smaller sub-segments of the fleet as they contain old tonnage and hold the largest scrapping potential as markets develops.

While the container industry is and has been the segment where postponements have taken place the most, it seems as if that effect has been catching up during the course of 2010. While deliveries in dry bulk and tanker segments seem to end in the lower end of BIMCO estimates, containership deliveries seem to end in the higher end of BIMCO's estimates for fleet growth in 2010. 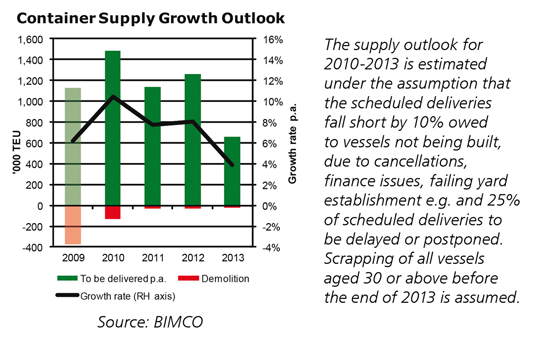 The supply of newbuildings is going to be significant in 2011 and in 2012, as it was in 2010. Supply growth of 8% in coming years is expected. It appears unlikely that such inflow could be more or less balanced by demand, as it has been during most of last century. However, the industry has to continuously manage supply in the coming years as the industry will drag along a fundamental imbalance between supply and demand as ship supplies have grown by 15% during the last 1½ years while volumes are only back at par with 2008. Congestion, insufficient infrastructure to cope with cargo flows and changing trade patterns are other matters affecting the market balance.

Outlook:
How deep will the current slowdown dig? BIMCO foresees that the slide in rates will continue if oversupply of capacity on the strings is not reduced – and so far some liners appear to be hesitant to take capacity out of service. Volumes are not expected to rise again until the beginning of February 2011 following the Chinese New Year. BIMCO estimates that more than 300 vessels could become idle in the meantime before markets return should the industry respond firmly to the lower volumes in its quest to keep freight rates from sliding further.

Increasing idling of ships is expected to hurt tonnage providers the most. This is evident from the development in the time charter market, where the average charter period has gone from 18 months in first half of 2008 down to 6 months now. Charter rates also have some ground left to cover before they come back to pre-crisis levels. Tonnage providers sit on a hot spot right row and hesitate to make deals in the hope of better charter rates down the road. Meanwhile, operators have the upper hand and could benefit from a large supply of new ships adding downward pressure on charter rates a few months down the road.

Keeping that in mind, BIMCO does not have a very strong rebound in sight for container shipping in 2011, but expects demand will remain firm in the higher single-digit growth area. BIMCO does not expect container demand to grow double-digit in 2011, as private consumption in the main consumer societies of Europe and the US continues to struggle. For the recovery to become sustainable, private consumption has to take over from the large public stimulus packages that have driven demand forward – and we are still waiting for that to happen in a number of key countries. This is why the IMF just recently revised the growth forecast for the US downwards, while the growth forecast for EU, despite being upwardly adjusted, still remains quite depressed.

Despite a massive inflow of new containerships in 2010, 2011 and 2012, it is not expected that the oversupply of capacity will cause freight rates to stay depressed throughout the next couple of years. The markets know by now how to handle a drop in demand and make freight rates recover and bring about a return of black ink to the bottom lines of the liner companies. A drop in demand as we saw in 2009 is not likely to be repeated unless an unexpected double-dip should materialize. Idling of vessels will be the swing factor for control of supply – while slow steaming and extra slow steaming is here to stay for the benefit of the industry as well as the environment.

Container shipping companies are increasingly turning to the capital markets for their funding needs, taking advantage of current low interest rates and high investor demand. Maersk’s recent bond offer for EUR 500 million with a yield of 4.375% compares favourably with recent bond offers by its competitors. In September, China's COSCO placed a 10-year RMB bond 4.35% for a principal amount of RMB 5 billion (USD 750 million) and Hapag-Lloyd placed a total of EUR 330 million and USD 250 million at 9.0% and 9.75% respectively.

Contact online
BACK TO: Tanker Shipping - Oil demand is growing - but freight rates stay subdued as vessel supply is plentiful NEXT: Dry bulk orderbook at same amazing size as one year ago