Overall demand remains strong in volumes with European trades picking up to supplement Asian demand. Volumes are set for 7% growth in 2011

Demand:
Overall demand remains strong in volumes with European trades picking up to supplement Asian demand. Volumes are set for 7% growth in 2011 following this year’s 9% growth.

During the 2nd half of 2010 Capesize rates have been increasingly volatile and running their own show, while smaller segments have been much calmer, with rates staying quite firm but with a slightly downward tendency over recent months. Capesize rates increased more than 200% from July to October only to weaken once again as Chinese iron ore demand is leveling out going into the Winter season and lower steel production, but also due to a massive inflow of new Capesize vessels, which is constantly reminding owners that Capesize earnings cannot defy gravity forever. 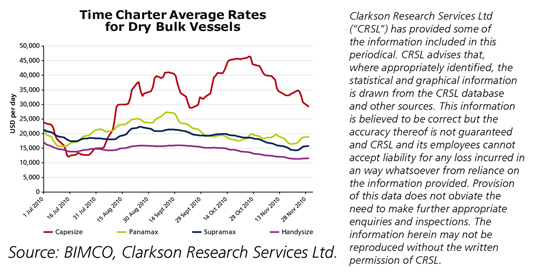 In Asia, thermal coal demand, particularly in China and India, remains strong. However, restraints on global thermal coal supplies are becoming more of a factor in the market. In the last few months, Indonesia has experienced sporadic periods of heavy rain which have affected production and delayed exports. Moreover, global weather-related supply limitations affecting also Australia and Columbia will likely lead to export delays and port congestion.

Going into the Winter season thermal coal imports, China is expected to set new records in November and December as stocking up for the Winter is going on to prevent shortage of supply. Winter imports could be dwarfing the previous high from January 2010 where 16 million tonnes were landed in China. Increasing coal prices support this view, with prices going from Yuan 780 per tonnes up to Yuan 850 per tonnes at the end of October. Going forward, Chinese coal imports could turn into an even stronger long term market driver than today.

Despite the strong coal demand Panamax vessels, being the preferred coal hauler in many trades, still continue to experience a slide in earnings. The segment generally lacks lifting power from the Capesize segments as the Capesize:Panamax ratio has remained below the level that normally support splitting of cargoes.

While European demand for thermal coal hesitate to pick up, demand for coking coal has recovered much of the lost ground and is estimated to come in just short of the previous high levels of import in 2007 and 2008. Nevertheless, this demand is only mirrored to a certain extent by the comeback in iron ore imports, as a drop in demand by 38% in 2009 is not nearly compensated for by a rise in demand of “just” 39% in 2010 as the production of steel is not growing strong enough.

In Asia, the European story also goes for Japan. In China, imports for the first 10 months of 2010 came in at 502.5 million tonnes, which is down 2.4% as compared to the same period last year. Iron ore prices on 62% FE content ore has been on the rise since late September and are now trading around USD 160 tonnes. A clear indication of strong demand, even though volumes have not set any new records lately. 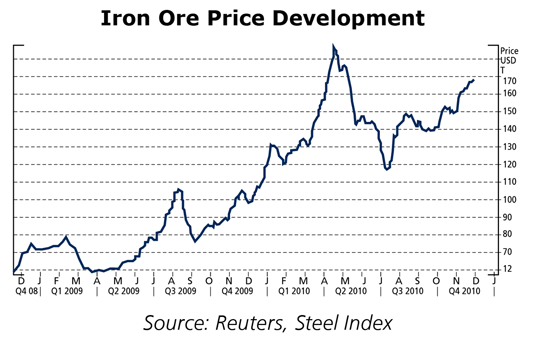 With the cost element from transports of dry bulk commodities being minimised if freight rates remain at current levels, future shipping demand will depend increasingly on the price of the commodity itself as compared to the price of the same domestically produced commodity, wherever there is a possibility to switch away from imports.

Even though western demand for dry bulk commodities has come closer to a normalisation, dry bulk shipping remains more than ever a China story. The country's fixed-asset investment on infrastructure excluding railways soared 35.7% to Yuan 150.7 billion (USD 22.5 billion) last month. That is a much faster growth rate than the 17.9% year-on-year growth for the first 10 months of this year, according to the Chinese Ministry of Transport.

The total 10 months fixed-asset investment in infrastructure, excluding railways, reached 1.02 trillion Yuan.  These massive investments are set to stay put as China’s urban planning body earlier this year announced that construction of urban public facilities would total at seven trillion Yuan from 2011 to 2015.

Year-on-year growth in Germany came in at 7.9% in September, sliding from 11% in August. Japan showed the same pattern with industrial production growing 11.1% in September y-o-y down from 15.4% in August but still at very healthy levels.

Supply:
The number of ships and amount of deadweight in the orderbook has been stable throughout the last two months. This indicates that orders are placed at the same pace that ships are being delivered. In particular, dry bulk owners have not hesitated to rush back to the yards to order new vessels. This happens only one year after owners rushed to the yards for cancellation inquiries and postponements request to do whatever it would take to avoid the once ordered vessels from being built or delivered on time. What a difference a year makes!

The active fleet has grown by 14.2% so far in 2010, caused by deliveries of 67 million DWT in the form of 818 new built vessels offset by just 5 million DWT being demolished.

Year-to-date deliveries in Capesize segment amount to 168 ships comprising 30.2 million new DWT, resulting in an increased fleet size of 19.5% so far in 2010. At the beginning of 2009, 823 Capesize vessels were active, less than two years later that number has grown to 1123 vessels – a fleet increase in DWT of 42% in less than two years.

Despite a large number of deliveries in 2010 the orderbook to active fleet ratio remained as high as 53% by end-November. 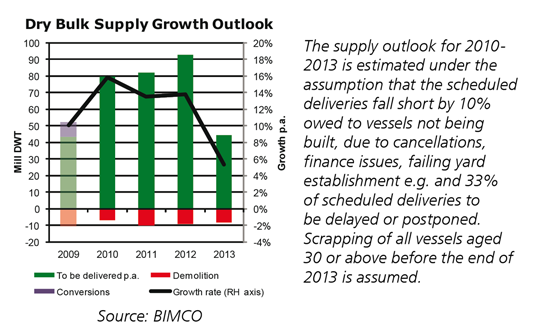 Outlook:
The oversupply of ships is bound to keep freight rates from flying as high as in recent years. But for dry bulk shipping being a tramp shipping industry driven by the demand-side, there will also be moments in 2011 where rates will spike due to inefficiencies in loading and discharge ports.

Rio Tinto and BHP Billiton, the world’s second- and third-largest iron ore exporters, may raise contract prices about 7% in the first quarter of 2011. Under the new quarterly price-regime, quarterly prices are based on the three-month average of indexes provided by Metal Bulletin, Platts and the Steel Index, with a one-month lag period. Data from Metal Bulletin shows that the iron ore price on 62% FE content ore arriving at Qingdao port averaged USD 145.95 per tonne, including shipping, from 1 September to 25 November, compared with USD 136.51 in the previous three months. This is equal to a 7% rise.

Steelmakers in China, the world’s biggest iron ore buyer, need to raise prices to pass on higher raw-material costs as demand slows in Winter. But Winter is a slow season for steel consumption, as construction work in Northern China will normally be suspended. Steelmakers are therefore left with eroding profits and may slow down demand for imported ore resulting in lower freight rates, particularly in the Capesize segment. Thus BIMCO reiterates its forecast of increasingly volatile Capesize freight rates movements going forward. Meanwhile, the smaller segments are predicted to continue along the recent trend as being less correlated with Capesize rates but also remain in semi-depressed condition, with Handysize trading in the intervals between USD 10,000-15,000 per day with Supra and Panamax trading in USD 15,000-20,000 per day for the coming months. An influx of new tonnage into all segments is expected to limit the upside in freight rates.

Vale, the world’s largest iron ore exporter, is scheduled to take delivery of the first nine 400,000 DWT Very Large Ore Carriers out of its total orderbook of 17 VLOC’s during 2011. In a falling freight rate environment for Capesize vessels this could turn out to be an expensive adventure into ship owning. But at the end of the day, Vale may receive from the markets what it wants most – low charter rates – due to massive oversupply of Capesize vessels and VLOC’s.