Tanker Shipping - Currently a tough time, but a pause for breath is foreseen at the end of 2010

The upcoming winter season could be a very welcome time-out from sub-USD 10,000 per day markets for both crude and product tanker markets. BIMCO forecast that freight rates for VLCC will firm as the winter season

The demand for crude oil tankers is closely correlated with the global oil demand. IEA forecast a growth of global oil demand of 1.9 million barrels per day equal to 2.2% in 2010, but with a significant downside risk if the world economy were to stall. But this volume growth will merely bring oil demand back to the level of 2007.

But it is not the volumes in itself that is interesting – it is the shift in the composition of global oil demand which is troubling for the crude oil tanker industry, since the new demand picture is one that consists of fewer tonne-miles. BIMCO analysis show that demand growth in the East has to be double in quantum to the demand slowdown in the West to compensate fully, as a round trip from AG to LOOP takes around 72 day while a round trip from AG to Shanghai only take 37 days.

So while demand for VLCCs going East with crude oil is showing signs of strong growth, big oil consumers in the West are still not as thirsty as they were prior to the crisis. The shift in oil demand is causing shorter sailing distances, so in order to maintain the fundamental balance with the present fleet in the tanker markets, oil demand has to grow twice as much in the East as it shrinks in the West.

The underlying trend is more challenging for crude oil tankers than product oil tankers, as the business is developing towards higher growth in oil products transports than crude oil transports because refineries are being built closer to the oil well today than 20 years ago.

More on the troubled waters for the crude oil tanker business in the BIMCO analysis archive on BIMCO.org from September 2010.

According to Gibson, VLCCs used for floating storage came down dramatically by end-August, where only 18 VLCCs were engaged. The level of VLCCs used for storage has been quite stable around 40 units since early 2009. This recent drop has impacted a market which is already pressured down to sub-breakeven freight rate levels. 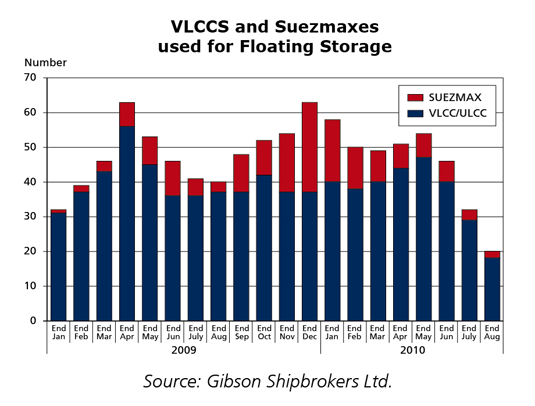 The worst US driving season on record has just ended – in terms of seaborne imports of finished motor gasoline particularly on the traditional arbitrage-driven trans-Atlantic trade. Following a nice pause for breath in June and early July rates from Rotterdam to New York on TC2 are back below USD 10,000 per day.

Product tankers are influenced by the same trend as crude oil tankers. Demand grows in the East and slows in the West. The problem is that ships are built in the East, launched directly into a sour market and adding further tonnage to the list of free ships. Only a few choose to ballast into the Atlantic, as tanker demand remains weak in the West. This has resulted in rates struggling to stay above USD 10,000 per day. 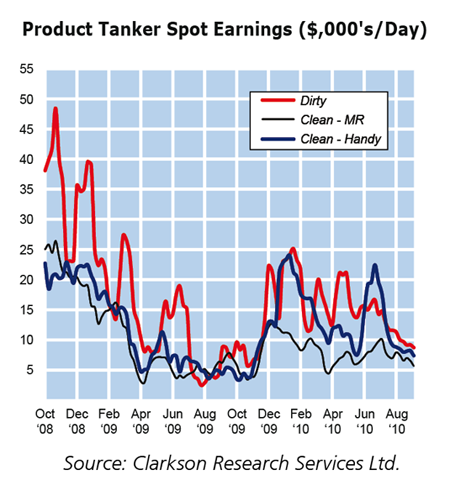 A couple of LR2s were fixed for storage in the West at low rates. This reduced the potential October surplus of vessels in the Arabian Gulf, but hardly enough to change the gloomy outlook for ships loading in this area during the next 1-1½ months.

The active tanker fleet has grown by 3.2% so far in 2010. Caused by delivery of 32 million DWT offset by 10 million DWT being demolished while another 8 million DWT is being removed from the fleet to become converted into FPSO/FSU or large ore carriers.

While the second hand market has been subdued the newbuiliding market has somewhat picked up. As many as 37 VLCCs have been ordered, accounting for half of all ordered tonnage (25 million DWT). The phase-out of non double-hulled tankers has been slow until recently. Still another 35 million DWT needs to be demolished or converted before the end of 2010 or 2015, depending of hull type. At the beginning of the year 52 million DWT of phase-out-ready tonnage were still sailing; half of that was VLCCs. Today, 54 single-hulled VLCCs remain more or less active and some have fulfilled the CAS requirements to achieve exemptions from the 2010 deadline. CAS requirements are met if the ship is fit to continue operations, having regard to the size, age, operational area and structural condition of the ship and provided that the continued operation shall not go beyond the date on which the ship reaches 25 years after the date of its delivery.

More on the phase-out of tanker tonnage in the BIMCO analysis archive on BIMCO.org from October 2009.

India remains the top discharge country for singles, as many of the largest Flag/Port states have banned the entry of single hull tankers. Thailand is another port of call for these ships which have been doing business in fewer and fewer trades in recent years. But as long as 2-3 trips were done each year, it was good business. Today, a modern VLCC makes USD 8,000 per day and the market for single skins is literally gone, with an oversupply of modern tonnage.

Brazilian mining company Vale have taken a whole series of single skins built in the early 90’es from Frontline Group and Vela. These vessels are currently undergoing conversion and are expected to be delivered to Vale for the transport of iron ore to China later this year. 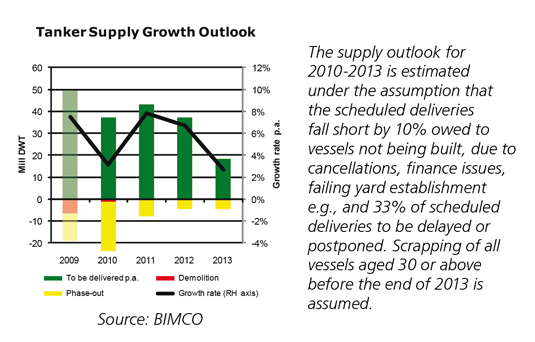 The upcoming winter season could be a very welcome time-out from sub-USD 10,000 per day markets for both crude and product tanker markets.

The overall trend is clear; it is very positive that Asian demand has grown and will continue to grow, but to offset the drop in Western demand, the oil thirst in the East is not strong enough to offset the lower consumption in the West. This is due to fewer tonnes-miles. The underlying trend is more challenging for crude oil tankers than product oil tankers, as the business is developing towards higher growth in oil products transports than crude oil transports, as refineries are being built closer to the oil well today than 20 years ago.

Contact online
BACK TO: Dry Bulk Shipping - New orders are still inked at high pace. 2012 is now set to be the biggest delivery year of them all at 88 million DWT NEXT: Container Shipping - Going slow across the board has brought back black bottom lines