Demand:
Getting supply to match demand with the result of healthy rate levels is as difficult as forecasting the weather just one week ahead – almost impossible, with too many factors to influence on the outcome. The tide seems to be turning for the delicate balance in the market – which in recent weeks has resulted in rates going up. The combinations of carriers redeploying vessels to enter services bound for Europe and Mediterranean as well as trans-Pacific with no conspicuous growth in fresh cargo supply influenced rate levels negatively.

New services are introduced on Far East/Europe. According to AXS-Alphaliner as much as 297,000 TEU is to be employed. Inflow of tonnage to that extent is likely to result in rates going south. To put the amount of tonnage into perspective, it can be compared to calculations made by BIMCO, which found that the increased demand on Far East-Europe trade of 5% in 2010 would be satisfied by deploying 575,000 TEU.

The container market is more consolidated than both the dry cargo and tanker markets. This has most likely helped maintain discipline in terms of flagged rate restorations and capacity reductions. The largest restoration has been on the Far East/Europe, where container rates just a few weeks ago were more than 50% above rates from week 47 in November 2009. 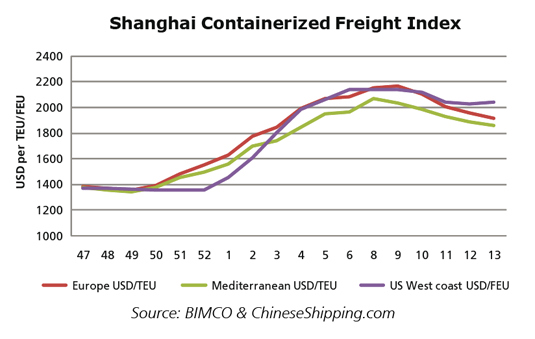 According to the Shanghai Containerized Freight Index (SCFI) rates have improved significantly on trades going to Europe, Mediterranean and the US West coast. Following a flat rate environment in November and December 2009, freight rates hiked 60% before they steamed off, going from USD/TEU 1,368 on Shanghai/Europe, up to USD/TEU 2,164 and back to USD/TEU 1,917.

Even though rates have been improved, the trouble is still around as volumes are still down. Very significant year-on-year freight rates and volume growth rates hitting the front pages of the newspapers during the last four to five months sounded like a fairytale – but was not, as the comparable levels of last year were hitting rock bottom. During the downturn, freight rates fell most on the Far East/Europe trade – and thus have a tendency to become the one with the highest rises. When rates drop by 50%, it takes a 100% rise to get back even.

According to AXS-Alphaliner, 1.2 million TEU is currently to be considered idle and around 50% of this idle capacity is owned by financial interests without end-user contact. This underlines the argument that cascading is pushing out not only smaller vessels but also those vessels not owned by the liner companies. This 50-50 ratio between non-operating owners and liner companies seems to be quite steady – recently due to more time charter deals made at levels below break-even but at levels that secure the tonnage owners some kind of cash flow even though the bleeding is not stopped is help smoothing the creditors that your vessels is at work and not just idle losing even more money every day.

Slow steaming and idle capacity represents approximately 17% of global capacity, which was almost the difference between the supply and demand in 2009. Therefore, in first quarter of 2010, the market was in a situation where rates could actually increase and utilisation was above 90% on a few trades.


Supply:
The container fleet has grown by 1.9% during first quarter of 2010, caused by deliveries of 241,512 TEU of newbuildings offset by just 38,431 TEU being demolished. Demolition is down 47% compared to same period last year. 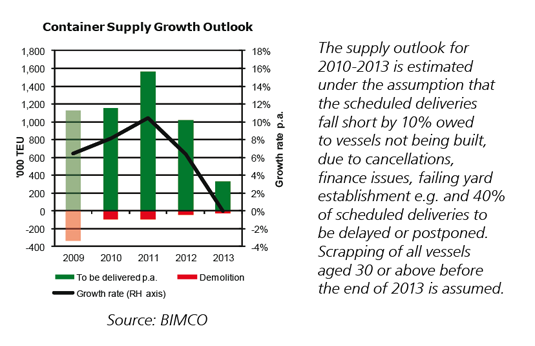 Clarkson’s have scheduled annual deliveries of 2.1 million TEU in 2010. BIMCO assumes that 10% of the entire order book will not be built and 40% of the rest will be deferred by one year. The container segment showed the highest rate of postponements, with one out of five vessels deferred within the previous three months in the BIMCO analysis released in early December 2009. This is the reason for assigning a higher deferral-rate to the container segment than to the dry bulk and tanker segments.

BIMCO forecast inflow of new container tonnage in 2010 to reach 1.15 million TEU, offset by demolition of just 0.1 million TEU. This could make the fleet grow by 8% in 2010 as compared to 6.5% in 2009. More deferrals are not likely, as the amount is already high. Deliveries in 2011 are forecast to be even higher before supply growth comes down in 2012. The total demolition potential is calculated to just 262.955 TEU, equal to all vessels aged 30 or above to be demolished by the end of 2013. 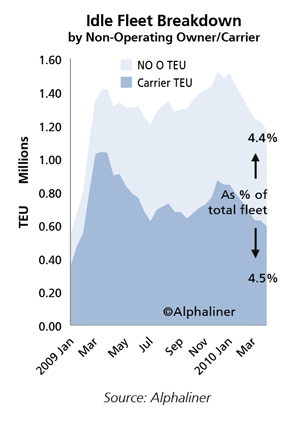 which will mean that the current idle fleet of 10% of global capacity is likely to be reduced only slowly. Also, new capacity will continue to flow into the fleet. The Chinese middle class is expected to drive the intra-Asia box boom. The intra-Asian market forms around 35% of the container market today, but it could be as high as 50% by 2015 according to Inttra, which is a global e-commerce shipping platform. One new city of 1 million people will be created each year for 15 years. That’s where all the demand is coming from. Inttra states that, this would be the result of the growth of wealth in China with more disposable income from the rising middle class that would favor imports of goods in containers.


Current news:
The recent shortfall in available tonnage to satisfy demand has resulted in large shippers speaking up about the bad consequences of slow steaming and new allegations of co-operation amongst carriers that ought to be scrutinized by anti-trust authorities.

According to Drewry, US politicians are asking why American exporters are being left high and dry, as if they haven’t always had to play second fiddle to importers. Exporters are being courted by the Obama Administration as it views the outbound growth as the way to balance and stimulate the country’s weak economy. Right now  they seem to be looking for someone to blame and carriers might  find themselves blamed alongside China as being responsible for destroying US jobs. China is being blamed for having its currency pegged to the US Dollar to boost its own exports – instead of having it in free float. Paul Krugman has calculated that having a pegged Renminbi has directly reduced US jobs by 1.4 million.

Contact online
BACK TO: Tanker Shipping NEXT: Need for rethinking about when to sail around the Cape of Good Hope?