Floating storage is coming down on the narrowing of market contango, but persists in playing an important part in tanker demand

Floating storage is coming down on the narrowing of market contango, but persists in playing an important part in tanker demand

Demand:
Freight rates continued to tumble in early February from their January peak on the back of weaker demand and increased vessel availability. However, with oil demand now recovering from the 2009 slump, rates for large crude carriers held up, rebounding somewhat towards the end of the month as eastwards chartering activity increased after the Chinese New Year holiday. That development continued in March. 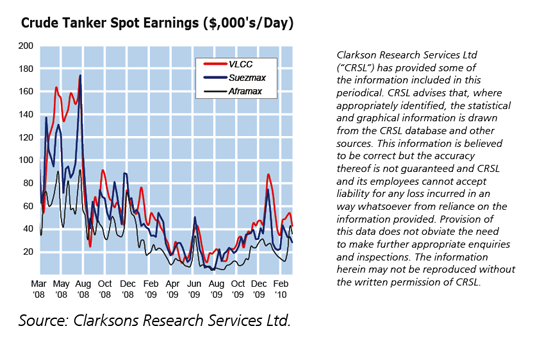 Recent weeks have seen changing future expectations also begin to shift price structures. Ever-present geopolitical risks also moved centre-stage in recent weeks, helping lift the front end of the curve, amid concerns on Iran, Nigeria, Iraq and the Malacca Straits. Market contango (forward prices above prompt) has narrowed. Questions abound on whether tighter prompt markets or less alarmist views on the future underpin this shift. The answer is probably a bit of both. 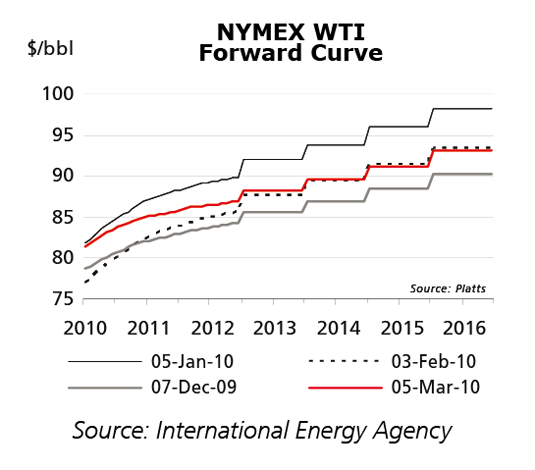 Floating storage is coming down, and there are fledgling signs of resurgent industrial activity which could even put a floor under waning OECD oil demand. Petrochemical sector restocking may translate into higher diesel demand as goods move to domestic and export markets. The narrowing of the gasoil contango encouraged sales from floating storage.

Global refinery throughputs are revised down by 0.14 mb/day to 72.5 mb/day for 1Q10, nonetheless 0.91 mb/day higher than a year earlier. Newly added refinery capacity pushes up expected Chinese and other Asian runs by a combined 2.1 mb/day y-o-y in 1Q10, but OECD throughputs remain constrained.

Higher runs in non-OECD Asia underpin much of this throughput strength, making the impact on OECD product stocks difficult to assess.


Supply:
The active fleet has grown by 1.3% during first quarter of 2010, caused by deliveries of 11.7 million DWT offset by tonnage removed for conversions amounting to 1.4 million DWT and 4.6 million DWT being demolished.

BIMCO forecast inflow of new tonnage in 2010 to reach 38 million DWT, offset by phase-outs of just 13 million DWT and “normal” age-scrapping of 1 million DWT. This could make the fleet grow by 6% in 2010 as compared to 7% in 2009. Deliveries in 2011 are forecast to rebound and hit a new all-time high of 50 million DWT before supply growth comes down in 2012.

Clarkson’s have scheduled deliveries of 60 million DWT in 2010. BIMCO assumes that 10% of the entire order book will not be built and one third of the rest will be deferred by one year. Furthermore, the total phase-out potential is calculated to 49 million DWT with total “normal” age-scrapping adding another 2.6 million DWT equal to all double hulled vessels aged 30 or above to be demolished by the end of 2013 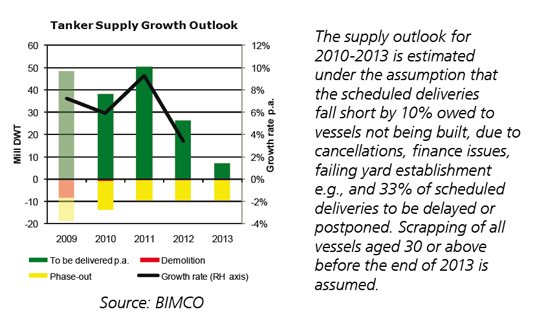 BIMCO assesses that the phase-out potential is not going to be fully unleashed in 2010, contrary to more bullish optimists. Non double hulled tankers will continue to trade beyond 2010 but not beyond 2015, which is definitively the final curtain call for these old workhorses. Continued trading extension permissions on the back of life extension inspections as per IMO provisions and ongoing trading opportunities for these debt-free vessels leave the owner with a need for just 2-3 fixtures a year to make satisfactory earnings and avoid scrapping of the tanker.

Scrapping is generally slow. This supports the argument that the phase-out of single hull vessels in not going to be massive in 2010, but it is going to be a gradual scrapping with an overweight in 2010 and then fading in quantum towards 2015.


Outlook:
Looking forward, the outlook for the freight market remains bearish as seasonally lower demand combines with a swelling fleet. Even taking into account the phasing out of single hulls and a delay factor of over 30% on new deliveries, vessel oversupply will likely persist, weighing heavy on freight rates. Given the oil demand destruction seen in 2009, it will be at least until 2012 before oil consumption is back to 2008 levels.

Looking forward, the outlook for the freight market remains bearish as seasonally lower demand combines with a swelling fleet. Even taking into account the phasing out of single hulls and a delay factor of over 30% on new deliveries, vessel oversupply will likely persist, weighing heavy on freight rates. Given the oil demand destruction seen in 2009, it will be at least until 2012 before oil consumption is back to 2008 levels.

Seasonality and forward fundamentals will influence stocks in the months to come. Historically, OECD inventories build during the second quarter, aided by seasonally lower demand and increasing refinery output ahead of the Summer driving season. IEA projects global demand decreasing by 0.4 mb/d from 1Q10 to 2Q10 while global refinery throughputs should increase slightly.

Refiners have scheduled a heavier than usual seasonal maintenance work programme over the next several months, which will reduce spot purchases of crude oil and could add some downward pressure. Even China is slated to curtail refinery runs in March, but at an estimated 8.1 mb/d are 1.2 mb/d above levels of a year ago. The general lower run levels represent an attempt to sustain the firmer refining margins seen in February.

Current News:
European diesel demand and American gasoline demand have been mainstays of the MR market in recent years. However, European governments’ environmental and vehicle scrappage schemes have led to a decrease in market share for diesel cars. Coupled with reduced gasoline demand from America, there has been downward pressure on MR freight rates. In the long term this could lead to development of alternative long-haul export routes from Europe.

Modest economic growth in both the US and the EU in 2010 should trigger demand for transportation of oil and oil-related products. However, lower gasoline consumption in the US will negatively impact product tanker demand in the years ahead. In the shorter term product tankers will not see demand pick up until US demand for gasoline takes off and new refinery capacity in the Middle East starts to take market share from the more conventional refineries in the consuming regions..

Contact online
BACK TO: Dry Bulk Shipping NEXT: Container Shipping