Global economy:
Although by most measures the world economy is out of intensive care, it is hardly in good health. Large emerging economies are growing briskly, with strong growth in domestic demand and scant spare capacity, but in many developed nations like the US, the recovery is fragile. Growth is still heavily dependent on government stimulants in many countries, even as their side effects are becoming clearer. In China, a huge state-directed lending binge has succeeded in propping up domestic demand and growth rates, but also fuelled asset bubbles, especially in property, and made the economy vulnerable to a sudden clampdown by bureaucrats. In the developed countries the main worry right now is sovereign defaults and heavy public deficits, all happening while jobs are still being shredded (albeit at a lower rate). House markets are still wobbly and consumer spending is likely to remain subdued.

At the same time, the financial systems are still shaky even though they are on the way towards more stable ground. Increased focus is now on countries which present new dangers for the world economy. Three factors will determine whether such fears are justified. The first is the strength of recovery – whether it is self-sustaining, or still propped up by government stimulus. The second is the scale of the sovereign debt problems and the third is the skills with which the world’s central bankers and finance ministers design and co-ordinate the withdrawal of policy stimulus.

Countries such as India, Brazil and to a certain extend also Germany, have largely put the downturn behind them, while countries such as Europe’s PIIGS (Portugal, Ireland, Italy, Greece and Spain) which were already troubled and heavily indebted before the crisis, are now facing even more challenges on still more fronts.


When to exit?:
The IMF, which believes that a “premature and incoherent” exit from stimulus is a serious danger for the world economy, wants no fiscal or monetary tightening in big, rich economies until 2011. Because: If countries start cutting budget a year late, they will have an unnecessarily large debt burden. If they tighten too early, and the world economy relapses, the mess will be far bigger.

All this leaves policy-makers with an inevitable task: deciding when and how to reduce the “drugs”. An “exit strategy” requires answers to three questions. 1) Timing: when should fiscal and monetary tightening begin? 2) Tactics: is it more important to start by cutting budget deficits or by raising interest rates? And 3) Technique: how will central banks, with their balance-sheets bloated by the unusual policies of the past year and a half, go about tightening monetary conditions? There are no easy answers. Avoid doing too much too soon – as it will kill a frail recovery. The biggest troubles remain in the developed economies like the US.


US housing markets:
Sales of existing homes declined slightly less than expected in February, despite the fact that February was an unusually harsh weather month, which a priori was expected to deter potential home buyers from moving into the housing market. The supply of homes rose dramatically to 300,000 dwellings (10%) - the largest increase in nearly two years. This comes at a time with many foreclosures still in prospect. Price trends were roughly flat over the month, and given the surge in supply, prices can very well continue to decline in coming months. Residential sales will probably get a new boost ahead of the expiry of the extended tax rebate at the end of April, but recent figures reinforce a reason for concern for a double dip in both prices and activity. 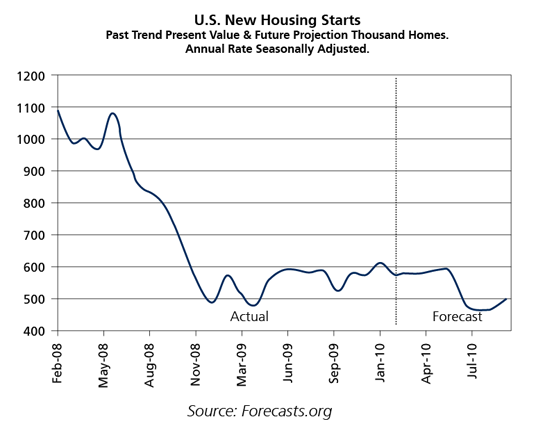 Turning point for the US labour market?:
March may very well be hailed as a turning point for the labour market, with employment estimated to display strong progress. An improvement in weather over February and especially temporary public employment in connection with the census appears to be contributing to recovery. There is expected to be a gain of around 150,000 people in March, but this is not especially impressive in view of the fact that the bottom of the economic crisis was reached almost a year ago. Basically, this is an improvement trend in the labour market, but it is based on a fragile basis, and the condition in the labour market can so far best be characterized as being stabilized. Indeed, market expectations for the unemployment rate also remained unchanged at 9.7% in March.

The US consumer confidence index, which had declined sharply in February, managed to recoup most of the loss in March. However, despite the increase in March, consumers continue to express concern about current business and labour market conditions. Also, their outlook for the next six months is still rather pessimistic. Overall, US consumer confidence levels have not changed significantly since last Spring.

Outlook:
After the sharpest decline in more than 70 years with a drop in world trade of 12.2%, world trade is set to rebound in 2010 by growing at 9.5%, according to WTO economists. Developed economies’ exports will expand 7.5% and the rest of the world (developing economies plus the CIS) will advance 11%.The World Trade Organisation sees the light at the end of the tunnel and trade promises to be an important part of the recovery, but protectionist actions must be dodged to avoid derailing any economic revival. 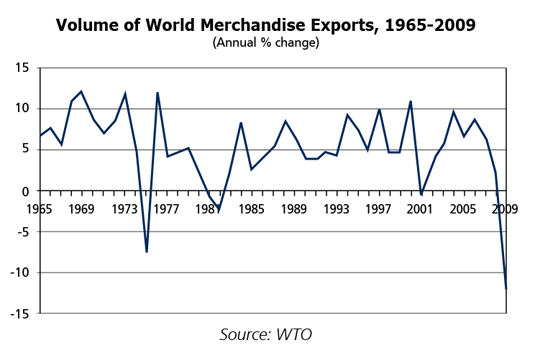 A 9.5% growth rate for trade is insufficient to bring about a return to pre-crisis levels this year, and even the 11% rate forecast for developing countries would not do the trick. However, two years of growth at this pace would result in trade levels surpassing the peaks of 2008. Developed economies, on the other hand, would require three years of growth to accomplish this.

Global seaborne trade is dependent on global growth, thus it is vital if general shipping demand is to go forward that a smooth transition from a sustained recovery to normalized demand become successful.

Did you know that . . .
MyBIMCO contains a module with Real-Time Spot Market Bunker Prices and Bunker Price Analysis?

Contact online
BACK TO: A look into the crystal ball: Do we need all the giant containerships? NEXT: Dry Bulk Shipping