Are recent rate hikes sustainable or will the massive impact of new build mega carriers damage the market during 2010?

Spot rates on main container lanes from Asia to US and Europe have risen. Rates from Shanghai to Europe are now 50% higher than 3 months ago. This is a clear indication that carriers have been able to meet demand at its current level – and that ships are now sailing near maximum capacity. Alphaliner estimates that 320,000 TEU are being absorbed by slow steaming at the beginning of February equal to 2.5% of the fleet. This can be added to total idle fleet of 532 vessels equal to 1.37 million TEUs.

Trans-Pacific eastbound volumes were down by 15.6% in 2009, while the westbound Asia-Europe trade saw volumes slashed by 14.6%. Trans-Pacific volumes have returned to growth in 2010 and liners are reporting ship utilization of 90% and above, proving that supply is about to meet demand due to large scale capacity reductions. Trans-Pacific capacity has been reduced by 21% since the August 2008. In order to gain the most advantageous position prior to the annual freight negotiations with the major shippers, carrying capacity is expected to remain tight in the coming months.

It is still too early to call a recovery – but the positive signs are beginning to materialize. Freight rates on all trades have rebounded from the abyss in mid-2009, but it is important to be aware that volumes still have a long way to go. 2009 was a meltdown in container transport with total volumes dropping as much as 10%. Drewry expects that global container port volumes will not reach 2008 levels until 2012. And in the meantime the fleet is not getting any smaller.

Supply:
The overall container fleet grew by 6.4% in 2009, caused by deliveries of 1.1 million TEU offset by 0.3 million TEU being demolished. Delivery of the order book was 40% behind schedule in 2009.

The idle container ship fleet may have found its level for the time being, but new deliveries will continue to put upward pressure on the market – as volume growth could be slow. Bear in mind that rates may have risen lately but absolute volumes were down as much as 9.7% y-o-y in 2009, which is back at 2006-07 level on total global container volumes. Discipline will be the keyword if rates are to be sustainable at current levels – as the temptation towards re-employing more tonnage on routes when rates are hiking could turn the balance negative and make rates drop again. Meanwhile, the conditions for the tonnage providers continue to worsen. 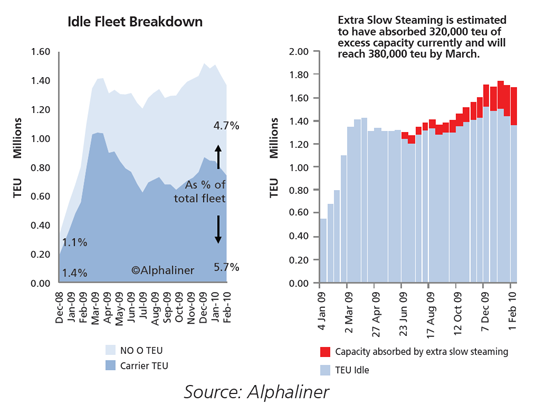 The scheduled order book shows 435 containerships, equal to 2.1 million TEU, are due for delivery in 2010. Of these are 61 mega-carriers of 10,000+ TEU most likely suited for Asia-Europe and trans-Pacific trades where more capacity is not really in demand right now. All but 4 of these ships are being built at established South Korean shipyards: Daewoo, Hyundai and Samsung. BIMCO analysis shows that the delivery of 14 of these vessels was already postponed in 2009; out of these 14 ships, 5 have been further delayed but are expected to be delivered during the 1st quarter 2010. Currently, there are just 35 mega-carriers of 10,000+ TEU on the water, so it is not rocket science to see that this extra capacity could make some noise all the way down through the system as cascading takes its toll.

The combined new building price for these 61 vessels is estimated at USD 9.7 billion, ranging from USD 133 million to USD 175 million per vessel.

Outlook:
Demand is likely to continue to be relatively subdued in the early stages of the year, with the potential to pick up as the year progresses. The scrapping potential is not a factor to consider with just 142,000 TEU being 30 years or above.

Applying a multiplier of 2 times GDP growth – container tonnage demand is estimated to grow by 7.8%. In the US, building of inventories was a strong contributor to GDP growth and tonnage demand, but with the demand still struggling this could be a one-off positive happening.

Because of effective limitation of carrying capacity particularly on the trans-Pacific services, but to some extent also on the Europe and Mediterranean services, carriers have enjoyed sufficient cargo volumes and close to fully booked vessel slots. Further reduction of capacity on key trading lanes is unlikely to be seen if rates continue to surge, as owner will be tempted to un-freeze laid-up tonnage to supply the market. But the fundamental market balance will probably remain very tight for a long time and depend almost solely on keeping supply growth on the leash.

With carrying capacity being abundant, a positive rate forecast depends almost exclusively on liner companies applying slow steaming and idling of capacity as an integrated part of business. This should be supplemented by ongoing deferrals of delivery of newbuildings to limit the fundamental imbalance in the short term and stretch the influx of new tonnage as far out as possible.

Current news:
19 out of 23 services from Far East to North Europe (FE/NE) are executed at reduced speed. In October 2009, only 3 FE/NE services used slow steaming. This is much more than currently being operated on the trans-Pacific services where 32% of the strings are handled in a slow steaming environment.

During the last 15 months container earnings have been negative. In order to counterbalance this cash outflow, liner companies have been active in getting fresh capital injections via shareholders, bond issues, government guarantees and charter owners. This comes as a response to tight bank lending. Drewry calculates that nearly USD 15 billion has been raised through such paths. However, more is needed to cover the cash needed for financing operations and in particular fleet investment programmes.

Contact online
BACK TO: Tanker Shipping NEXT: A look into the crystal ball: Do we need all the giant containerships?