Can tankers escape the doldrums and unleash cramped demand on the back of higher oil demand?

Can tankers escape the doldrums and unleash cramped demand on the back of higher oil demand?

Following a myriad of downward revisions of global oil demand, IEA returned early October to its usual bullish attitude and revised global oil demand up on the back of more optimistic IMF economic prognoses and stronger preliminary data in North America and buoyant demand in Asia/Middle East. IEA now expects demand for 84.8 mb/d (-1.7%) in 2009 and 86.2 mb/d (+1.7%) in 2010, Low demand and high supply has made OECD oil inventories swell to 60 days forward demand cover. Asia leads the rebound in growth, while consumers in developed countries where economies remain fragile are more sensitive to high prices, with signs of demand destruction when the barrel price rises above USD 80.

Expected global refinery crude throughput in 4Q09 has been reduced by 0.3 mb/d to 72.8 mb/d as higher crude oil prices, falling OECD demand and high middle distillate inventories continued to undermine margins. Refiners are expected to continue to run at low utilization rates, especially with the hurricane season mainly behind us.

September saw a glimmer of hope for the clean market but that was quickly swept away. It was the larger clean tankers (LR2 and LR1) which enjoyed a short break. The combination of softer rates and rising bunker costs is not a good combination. Clean tanker earnings have been submerged the entire year, MR- and Handysize- average earning y-t-d are as low as USD 7,468 and 8,495 per day. Barely covering operating expenditures, but definitely not servicing any debt the vessel may drag along.

Most clean markets are defined as weak for the moment, with diesel trade into Europe and naphtha to the Far East being the least subdued trades.

As the winter heating season is approaching, distillate is of particular interest. Distillate demand usually peaks in the winter months, but demand is down, mainly as a result of the recession. Distillate stocks, which are used to help meet peak winter demand in December through February, are currently very high. Distillate stocks typically peak around 135 million barrels in November or December before being drawn down through the remaining winter months. At the end of September 2009, stocks were over 170 million barrels – more than 25% higher than the typical peak. The recession has affected distillate fuel consumption more than it has gasoline. Distillate fuel mainly serves the heavy-duty vehicle fleet, which is closely tied to commercial activity.

The first evaluation of the impact from Jamnagar II in India came following the end of the first full quarter of operations and is discouraging. Heavily influenced by the development in global oil demand, the Jamnagar II impact on longhaul clean product export has been low. Focus has been on local markets, where the demand has remained in positive territory.

The VLCC sector has doubled earnings since mid-September, and was making USD 43,000 per day by end-November. The average earnings this year for a VLCC, just above USD 30,000 per day, has mainly been supported by China’s growing crude import for most of this year, although this was not a sufficiently strong force in itself to compensate for much lower imports by OECDcountries.

The number of VLCC’s engaged in crude oil storage was almost unchanged in October, in line with the almost unchanged upward sloping forward curve for crude oil futures in that month. Estimates point at 25 VLCCs used for crude storage and another 10 VLCCs for petroleum storage. In addition to that, 90 million barrels of middle distillates are also said to be at floating storage by end-October.

A net growth in tonnage supply of 6.9% y-t-d in 2009 is caused by total deliveries of 45 million DWT offset by 7 million DWT demolished primarily towards the end of the year and 10 million DWT removed by conversions. Last year a total of 50 tankers, mainly VLCC’s, were converted into dry bulkers – currently 14 vessels are under conversion into dry bulkers.

The fundamental balance in 2010 will depend almost exclusively on the extent of the phase-out of single hull tankers. Read the BIMCO article “Phase out of tanker tonnage – does it really matter to the market?”, for an in-depth analysis of the phase-out situation. 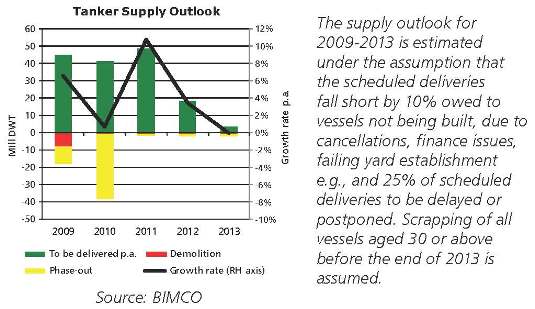 Fleet utilization has moved from a 2008-average of 90% in the direction of 80%, before entering into the winter season which could prove to be a non-event. The development in tonnage used for floating storage could prove a swing factor for the market.

Freight rates for crude carriers are forecasted by MSI to drop from current levels over the next 6 months. VLCC and Suezmax are forecasted
to see rates around USD 20,000 per day, with Aframax firming at miserable USD 10,000 per day. Product tanker rates are foreseen to remain under serious pressure during first half of 2010.

Chinese “consolidation” of the yard industry is when the big ones get the government loans and the smaller ones close down. What is happening here appears to be similar to government intervention in the coal and steel industries. Larger players had access to credit though state-owned banks while smaller players were left to twist in the wind. As they began to fold, they were bought up and consolidated.

Smaller yards in northern Asia have gone bankrupt. There are more to come. It’s mainly the financially weak and newer yards that have died or are dying. The larger and more established yards which are full until 2011/12 should, in theory, be able to survive on the phased payments due at the steel cutting, keel laying, launch and delivery stages. Builders are facing a cash flow squeeze because their clients, the ship owners, are seeking to reduce their own cash flow. These considerations are valid across all the shipbuilding nations.

Some yards are allocating investments to diversify into other heavy industrial areas to fill the possible employment gap following the last launches in 2012-2013.

Contact online
BACK TO: Dry Bulk Shipping NEXT: Container Shipping